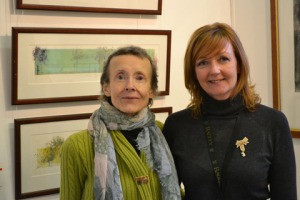 France Brodeur (left) with Dawn Harris, artist in residence at Ragley
Knowledge can really help illuminate an artist’s work, and hearing her talk for nearly an hour about how passionate she is for her work was certainly a good introduction to a new exhibition in Warwickshrie.
France Brodeur gave an illustrated talk about her exhibition, fittingly called A Lasting Passion, at Ragley Hall, before her exhibition opened in the Ragley Studio, in the picturesque nearby stable block, all organised by Dawn Harris who has an arts residency there and runs arts events on site.
The invitation also included a cream tea in the tearoom and, well, it didn’t tie in with my current diet plan, but it was too alluring an opportunity to miss.

France told of being born in Quebec to a mother who was a non-professional artist, and she herself studied translation and linguistics before becoming interested in silk printing and batik. She went on to study fine art at Concordia University in Montreal where she discovered print making, something she studied further and developed more skills at after moving to England in the late 1990s.
She joined the Oxford Printmaking Co-operative, and has continued to work and explore her ideas ever since. France spoke of her inspiration which could be anything – from seeing a hunter with a pheasant, which inspired a number of works, to the countryside rushing by beside the M40 through Warwickshire which was the basis for a 1998 series of prints.
France described her work as being about “having a dialogue with myself…I want a dialogue which doesn’t have a conclusion written into it”.
She also talked in detail about the different techniques of printmaking, all of which she seems to use, and could then be seen in her work.
France was asked about the lovely titles of her work, and admitted that having a husband who was a poet helped with some of the literary allusions in them!
After being fortified with a cream tea, we ventured out in the brilliant, but still chilly, spring sunshine to the gallery to see France’s works hung in the former stable block.
The block is a good setting for her works, which are mostly quite small in size.

The M40-inspired works were my personal favourites, some having the look of a Japanese design to them, all featuring a straight line of a fence, and with varied colours and shapes of trees and plans being seen at speed. Some are specific, such as Looking Up At Avon Dassett, others less so, titled An English Valley.
From the hunter with the pheasant, there are works influenced by the pheasant’s colours and also the texture of its feathers.
France’s other works move between abstraction and more figurative studies. Full Fathom Five not surprisingly looks like a view from under water, with currents swirling around. La Grenouille, or the frog, is similarly pleasant and outdoors-looking. Orient Dream looks a little oriental and is mainly in black and white with a hint of colour, and Sublunary features a large moon. One larger work features people, and lace was also used in the printmaking process, its patterns clearly visible.
Other works include small, floaty, fairly genderless characters, expressing what France called her love of life.
Techniques on show include etching, drypoint, monotype and collograph, and although the differences in method are not always apparent in the work, it’s clear to see that France is passionate about what she does.
A trip to Ragley is always a treat, and this free to see exhibition is another reason to visit. The exhibition is on until April 13.