What Are You Looking At?

The third in a series of exhibitions to celebrate artist John Yeadon reaching 70 features paintings of a manically grinning ventriloquist’s dummy and drawings of a strange creature called Biff.
These weird and wonderful creatures inhabit our world but through them we see it in a different and slightly unnerved way, one which is entrancing and repelling at the same time.
Over the years John has created different bodies of work in varying mediums. An exhibition in the former Coventry Telegraph building last year featured mostly large paintings from the 1980s, some of which had led to a scandalised and homophobic editorial in the paper at the time. There is also a decade of digital work which has not been featured in these exhibitions.
This show, at the Lanchester Research Gallery at Coventry University until February 22, is called Fearful Symmetry. It includes a large number of etchings and drawings of Blind Bifford Jelly, a grotesque character which is an amalgam of body parts; usually lacking one arm, and with his head in place of his torso.

The scene is set for the irreverence with which Biff sees the world in How Blind Biff Greets his Audience, showing our hero with his pants down, bottom and balls thrust towards us. In others he explains to animals “How the Big Ones Eat the Little Ones”. He breaks his journey to masturbate by the pathway, watched by a dog, and in the Houses of Parliament peopled by ape-like creatures he swings the mace.
In one of the drawings he visits Blackpool and gets his toe bitten by a crab, sees the Lady Godiva statue in Coventry, and Blind Biff Searches for God – with a torch, on the carpet. 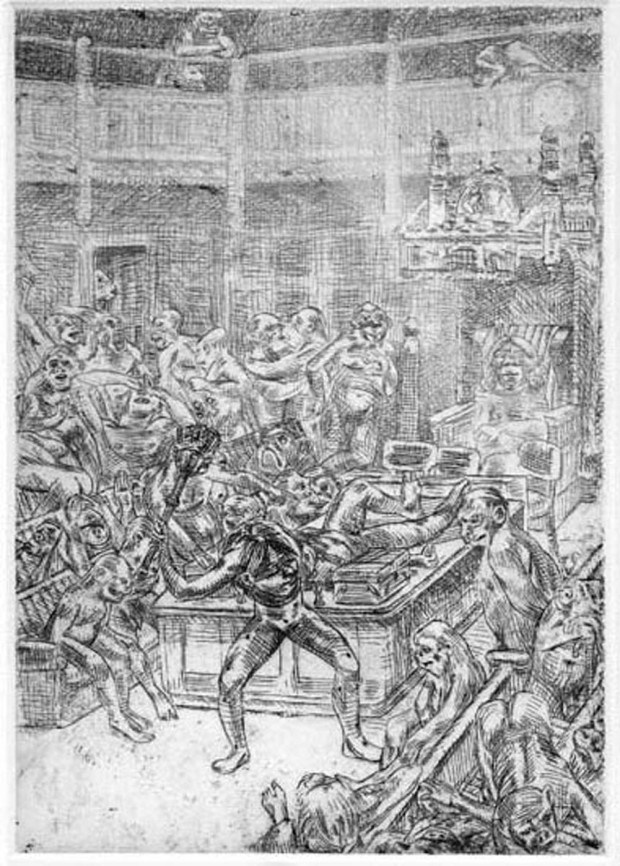 How BB Jelly Swung the Mace in Parliament

Biff also features in coloured works with a collage of images in each picture, including Biff exploring sneezing and enjoying a Christmas of drink and food.
In his introduction in the exhibition’s catalogue John said the character of Biff had been influenced by his mother’s ventriloquist dummy Tommy.

The fascinating family history of performing with ventriloquist dummies features in the next part of the exhibition, including family photos and memorabilia, and the Tommy and Annie dummies themselves. There are unnerving portraits of the pair in Tommy (the Suit Case Act) and Annie (Ghost of my Grandmother), specially the latter looking like a stocky and slightly menacing little girl.
Other portraits of them and other dummies show them in different poses and taking on characters and thoughts, raising the question of who is manipulating who, and really speaking out.
In an excellent essay in the catalogue, George Shaw recounts how he first met John Yeadon in the 1980s after discovering an exhibition of his work at the Herbert Art Gallery in Coventry, and he discusses the significance of the Biff and ventriloquist dummy works. Don’t miss it, and as Yeadon now turns 71, make sure you also don’t miss this excellent addition to the retrospective year.