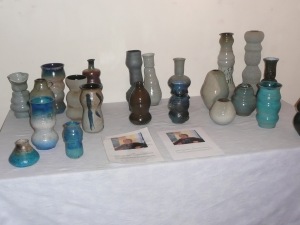 A potter who has left behind a large collection of works never shown in public before is amongst artists whose work is on display at an exhibition in Birmingham.

Val Gill was originally from Smethwick, but had lived in Birmingham for many years. She died on October 11, aged 63, leaving many of her creations in her flat.

She had studied at Liverpool Art College in the early 1970s and later worked behind the scenes at Birmingham Repertory Company and Birmingham Hippodrome. In more recent decades she had enjoyed working on her pottery skills in classes and then in the studios at the mac in Birmingham. 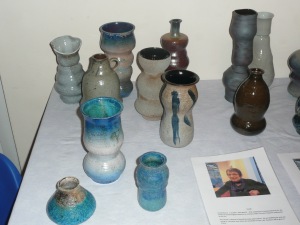 Some of her work had been seen in a students’ show at the mac back in 2006, but she had always declined being exhibited more generally; however friends, some of whom worked alongside her at the mac, have put a number of her creations on show in the Midlands Potters open exhibition at Woodbridge Gallery in Moseley until 3pm on Sunday, December 4. Visitors can take one of her works away with them for a donation of a least £10 which will go to a cancer charity.

The works are in her very recognisable style, including some small, symmetrical raku works and others with a shiny glaze. There are also larger, typically asymmetrical, pieces, some of which look like different pots works merged together to create one. They are in a range of colours but nothing too dramatic, mostly blues and aqua, or sandy or grey earth colours. Some which look like vases are larger at the top than the bottom, and others have a Moorish look to them.

The exhibition over the two floors of the gallery also features works by other Midlands Potters members. Karen James, one of the friends behind displaying Val’s works, is showing attractive bowls and vessels with swirly, attractive internal glazes.

Sally White’s practical creations including jugs feature ship motifs, and Jennie Howe, who had a MA in fashion and textiles has created ceramics with a frilly look to them. Graham Taylor’s works are ornamental chunks depicting the sea with boats sailing on them, and in the room upstairs Mirta Vargas’s works are influenced by pre-Columbian art, with small bobbles of clay and layers built up defining the shape.

Apart from Val Gill’s works being offered to raise money for charity, all other works are for sale. It’s an interesting exhibition showing the variety of work being done by potters from across the Midlands. 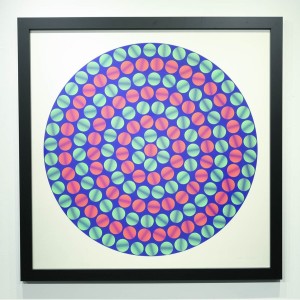 Op Art may not be new, but there are some new names to savour from across the decades in Op Art Past and Present, on show into the new year at The White Room gallery in Leamington.

Gallery boss John Gilks is a fan of op art so much of what is on show has been in his possession for some time, and he has provides short biographies of the artists to further inform us.

Ivan Picelj was a Croatian artist and a particular favourite of John’s, so much so he once nearly visited Zagreb to track him down – them bitterly regretted not making the trip when the artist died in 2011. At one end of the gallery are three of his untitled works, large colourful circles, made up of coloured circles within (pictured above). 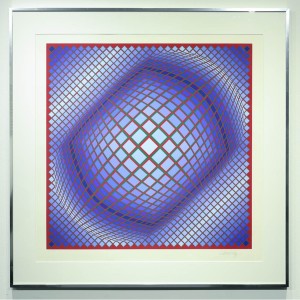 Described as the grandfather of op art, Victor Vasarely is represented by a strange work that seems to warp and move, with net-like circles and squares (above).

Genevieve Claisse was born in 1935 in Quiévy, France, the great niece of abstract painter Auguste Herbin. Her prints on show here are large, overlapping circles.

Carlos Cruz-Diez, who was born in 1923 in Caracas, creates metallic works and there are circles and squares here in different colours which look different as you move around in front of them.

There is a swirly purple and green print by Bridget Riley, and going down the age range somewhat, Damien Hirst is represented by one of his dot paintings. 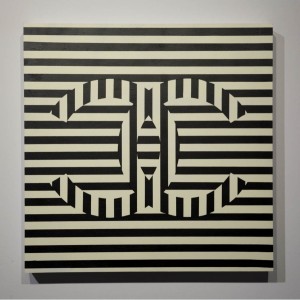 The very present is represented in the exhibition by Carl Cashman (one work, Chanel, above), with several of his works included. Cashman is more of a street artist who is inspired by Op Art and created a long mural on a wall at the Glastonbury festival. Here there is Peace Hurts, the CND symbol hidden amongst blue and white stripes. Jam Hot and Hot are more like street art, small but with glitzy paint. Love Hurts has the letters for Love in different colours in a square.

It’s an interesting exhibition, introducing some older artists who are still not that well known except to op art aficionados.

There’s still time (just) to see the Masterji & Coventry exhibition which has received widespread coverage including TV and national press.

The project is funded by a number of organisations including Coventry City of Culture Trust and the city council, with support from Coventry University, City College Coventry and Fargo Village. It is on show at The Box at Fargo until November 20.

Maganbhai Patel came to Coventry in 1951 from Bombay, and as the story goes he was bored with his job and decided to photograph his very different new home city. By 1969 his photographs were proving so popular he was able to set up his own studio. Anyone who has driven up Stoney Stanton Road in the past decades must have noticed Masters photo studio on the right hand side over the canal bridge, driving out of the city.

Masterji as he became known, now aged 94, had his works included in the Imagine Hillfields Exhibition in the same venue in August 2015, but this is the first solo show of his work. There are some gems here; portraits of many people from the South Asian countries, posing with their families, their possessions and their new lives, including the photo below, which apparently shows a bus conductor who later moved to Canada. 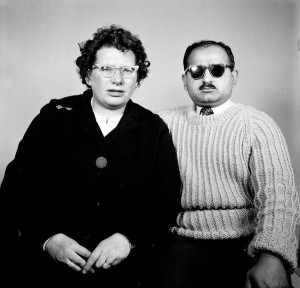 The influence of Elvis Presley can be seen in some of the portraits from that era, with men displaying slicked back hair and quiffs. Later, weightlifters have bouffant hair and early gym wear as they lift weights to impress. In one photo a man lounges incongruously on a coffee table, with a book and some flowers, and in another a wild-eyed man stares out of shot, his moustache pulled into sharp points.

The decades pass and some people have their pictures taken in Masterji’s studio – some of which has been transplanted here for the exhibition – or crowded outside their own new homes. Perhaps they were anxious to reassure people back home they were ok, or show off their own properties.

There are also his own family photos. In one, a young boy takes a bath in the kitchen sink, and hopefully the Ajaz container nearby had been left there only by accident, and wasn’t in use.

It’s a fascinating exhibition put together by Coventry photographer Jason Tilley, Mark Cook and others who prefer to use the group name Photo Archive Miners. It’s just a shame the exhibition isn’t on for longer so more people could get to see it. 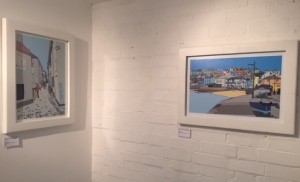 An exhibition of work created as a therapeutic “hobby” is currently filling a Leamington gallery.

Chris Putt, who lives in the town, creates most of his pieces under the name of Cult Zero. He hand sketches them, mostly strange cartoon-like or robotic creatures, then scans them and finishes off the work on computer, adding in the colour as he goes. There are also some works which are like living collages, built up in layers

Chris showed his work as part of a joint exhibition at Gallery 150 in Leamington three years ago, and is now showing in a solo show at Deasil in Oxford Street.

He said he had studied graphic design at the then Mid-Warwickshire College some years ago, but has worked in the transport business. 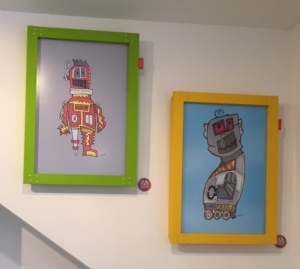 Chris said, of his original sketches and inspiration: “It’s my hobby and it’s just taken off. It’s what’s in my imagination and it just comes out of my head. I doodle – it’s my own therapy. I had all these sketch books piling up. I put a couple of things in the exhibition at Gallery 15 and they sold.”

That was several years ago and this exhibition represents his body of work since.

Chris does most of his works under the name of Cult Zero but there are some new works out under this own name, some images familiar to anyone who’s been to St Ives. Fore Street and the harbour in the town are shown, with much of the texture missing; the brick walls of building in the street are a bland grey, with the people wandering about in typical seaside style are the only spots of colour. 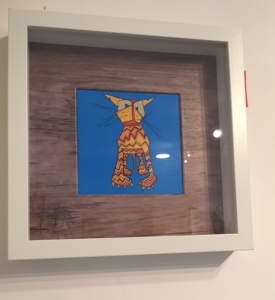 It’s an interesting exhibition of works which, in their final state, are hard to imagine as the original therapeutic sketches in a notebook.

The exhibition is on until November 10.