Elegant women clad in white saris paraded slowly around a marked route. A man fell gracefully to the floor, his profile then marked out in red tape in a crime-scene style.

A tall woman in enormous spiky heels and what looked like an Asian wedding outfit joined the parade, followed by a young man with a topknot and enormous platform boots.

A woman who may or may not have been a gallery assistant approached people and recited to them, as did the man. Then another young man in, er, underpants, boots and a long trail made up of squares of paper incorporating a flag sashayed around. Camp did not begin to describe it.

Traditional Sufi music was played live, and slightly incongruously the drinks came courtesy of Absolut so for the first time ever I viewed an exhibition, and one by a Muslim artist at that, with a vodka and orange in my hand. And I rather liked it.

The performance was called One, and was apparently researched and developed earlier this year with local residents and artists at the National Visual Arts Gallery in Kuala Lumpur.

It certainly made for a memorable night, as did seeing Quasim Riza Shaheen urging on the performers, nattily dressed in a stylish outfit incorporating high boots and a neckerchief. It was no surprise at all that he’d once studied fashion, and at Central St Martins in the late 1980s-early 90s, and the outfits of the performers were all his work. Though he said that now he designs only as part of his artworks.

So on to the main show – which takes some effort to interpret, and that is best done with some careful reading of the excellent guide by mac visual arts producer Craig Ashley.

The story of the exhibition is that it’s based around a love letter to the artist before his 40th birthday, reflecting on their love and proposing marriage. The letter is part of the exhibition.

Other works include a two-screen film of the artist dressed as Amy Winehouse telling of his admiration for her in I Lost My Passport in Your Dream, and a set of photos under the title Father Rock Me, showing the artist’s father and the actor Rock Hudson.

In the photo Samson and Delilah the artist looks worried as actress Vanessa Ahmed caresses his lovely long hair, and in the two-screen film A Bride of Khusro he appears as a woman to perform Kathak Dance moves to a Qawali soundscape, in front of a Sufi shrine in Karachi.

In A World Where There Are Five Women I Am The Seventh is a new commission which allows Shaheen to display his costume-making again, showing five sari blouses around a wedding dress; this apparently leaves space for another woman, a space he describes as ‘gender atypical’.

The obvious interest in gender raises questions, but the vital exhibition guide tells us that the adoption of a feminine persona echoes the gender transformation of the Sufi saints into the eternal brides of their masters, apparently.

Shaheen is an artist who has moved away from the ideas of autobiographical work to play with ideas of what may or may not be true, and create from that. The love letter, the guide tells us, is actually a creation of the artist. At the exhibition opening he said that he likes exploring ideas of relationships, but these are always viewed as romantic relationships – whereas to him his most important relationship is with his Kathak dance teacher of the last 20 years – Nahid Siddiqui, who was at the opening and who appears in his video diptych Arya with him, where he reads the love letter aloud.

It’s a striking exhibition, with layers of meaning and misinterpretation possible. And possibly best approached with a vodka in hand.

* Opening the same night, and which I also managed to visit, was the new exhibition at Eastside Projects.

It consists of speakers from which come the sounds of instruments damaged in various conflicts in the late nineteenth century, including the Balaklava Bugle, used to sound the Charge of the Light Brigade in 1854, and another military bugle damaged by a bullet.

The sounds are as you might expect – but the idea is interesting.

A little trip down to St Ives, and I somehow managed to sniff out an exhibition opening night – and also visit what I think is probably the best exhibition I’ve seen at the Tate.

While wandering off to dinner I discovered Wild Heaven opening at Uys Gallery in Tregenna Hill, St Ives, described as a celebration of landscape by St Ives artists, with the exhibition continuing throughout the current St Ives festival. A cheeky glass of red and a look round before my meal were both rewarding.

There are 45 pieces by a number of artists, and include paintings, drawings, and ceramics. Barbara Turner Jones’s three paintings, Wave Near Godrevy I, II and III are well executed and attractive, small works with close ups of the waves and some background detail.

Colin Smith’s Engine House is a line drawing of a typical St Ives sight, Mel Sheridan’s Nancledra seems to show allium heads against a background, and works by Melanie Uys, Trevor Price and Liz Luckwell also stand out. There are many galleries in St Ives but this one’s definitely worth a look round.

Also showing some big-name works is Belgrave St Ives, where pieces by Roger Hilton, Wilhelmina Barnes-Graham, Sven Berlin, and Terry Frost amongst others are also on show until the end of September.

The Tate St Ives is celebrating its twenty first year in the town, and its current exhibition also until September 28 is International Exchanges: Modern Art and St Ives 1915-65, which according to the publicity aims to show the art of St Ives “to place it not in relation to where it was made but in relation to what was made, how it was made and its position in wider international modern art”. What this means is an exhibition of works by artists associated with St Ives, but also pieces from wider afield.

My favourites were sculptures by Brancusi and Giacometti. There are also sculptural pieces from Naum Gabo, Barbara Hepworth, Eric Gill, and The Spider, a suspended work by Alexander Calder.

Other memorable pieces include Cossacks 1910-11 by Kandinsky, Schooner Under the Moon by Arthur Wallis (amongst others), George Bracque’s Guitar and Jug, Bryan Wynter’s Cyclamen, a Rothko, Number 23 by Jackson Pollock, and works by Peter Lanyon and Patrick Heron. Ceramics are represented by Bernard Leach and Shoji Hamada.

Information boards and a guide bring it all together in a way that makes sense, as well as including some top quality works by well-known St Ives artists, and those not normally associated with the town.

If there was ever an excuse needed to get down to St Ives before the end of September, the current exhibitions there seem to provide it.

What a fun night for the art show ligger in Leamington.

On Friday, Arts Trail Gallery in Regent Court, Livery Street, held a private view of a new exhibition entitled Le Maison Bleu, paintings by Bryan B Kelly, curated by Grazia Carano. I was invited to that so decided to visit. At the same time, Gallery 150, which has just moved across the street to different premises in Regent Court, held a opening night for its new exhibition, Human Spaces. I wasn’t invited to that, but as the galleries are only three doors apart, what the hell, I wasn’t going to miss it.

The exhibitions couldn’t be more different. Human Spaces, which I visited first, consists of works by seven artists, plus Kate Spence who gave a live performance in the window space at the opening. The exhibition was described as a figurative exhibition, which doesn’t have to mean naked, but that’s mainly what was on show.

Stand out works for me were Ray Spence’s series of photographs of life models, not in their ‘work’, but posing naked in more domestic situations. Alongside each was a question and answer session with the model. It’s refreshing to see the models have a voice, and also that they’re not all young and slight. Domenica, 58, lays back on a rooftop near a railway line, as the photo is taken from next door where a man cuddles his pet dog.

Anna, 45, lays on her kitchen worksurface, while Kadi, 28, is in two pictures while her partner and young child carry on with life oblivious. Cressida, 44, sits around while a man practises his French horn, and Arthur 79, poses imaginatively while a woman does the housework and makes a phone call around him. Only ‘H’, a heavily tattooed and, er, intimately pierced man doesn’t benefit us with his thoughts.

Ray’s works feel different for giving the models a voice, but there seems little new or different about many of the other works to show the theme of the nude has moved on at all, and some have odd overtones.

There are two paintings of Sophie, by Melvyn Warren-Smith, and the model tells, slightly worryingly, how she was persuaded to pose naked after visiting Melvyn and his wife at their home, but how liberating she found the experience ….

Neil Moore’s Release shows a naked woman with piles of ropes laying around her. It was a relief to see Emma Tooth’s paintings of a muscley breakdancer, complete with trousers.

By this time, at a packed opening, the gallery had run out of wine though there were still plenty of good-quality nibbles around. But there was more wine (and equally good nibbles) available at Arts Trail Gallery, though Gerry Smith who runs it suggested we visit his installation gallery first.

This is an empty shop within sight of the gallery where there’s a large window space. It’s been furnished brightly in a way which fits in with the paintings of Bryan B Kelly, which are all in very vivid colours. There were also some of Bryan’s accomplished pottery pieces on show there too, which were in more earthy colours and were rather stylish.

Paintings included The Little Red Butterfly, with the creature in the bottom left corner of the big, busy work showing purple and green fields. Four Sheep show the animals in one field, amidst a bigger landscape, and Herons Cove shows the bird on an island, again bottom left, on a huge expanse of aquamarine colour surrounded by fields.

The Round Tower shows the uncharacteristically grey tower in a landscape, reminding me of a trip I made many years ago to Bryan’s home country of Ireland. Bryan studied textiles and garment design in the 1960s and has only begun painting in more recent years, and describes his paintings as “naïve with more than a hint of surrealism”. Some of the repetitive dots and patterns also suggest an interest in Aboriginal art too.

Anyway, wine drunk, nibbles eaten it was time to move on from Leamington’s busiest art quarter of the night after what had been an interesting, and certainly varied night. 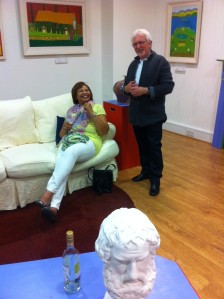 Pictures – The Little Red Butterfly, and Bryan with a visitor in the installation