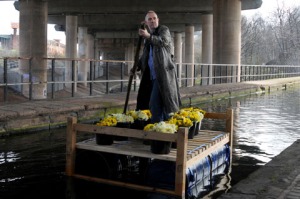 An exhibition has opened in Birmingham which is then going on the longest-ever art world tour, ending back in Birmingham on 28 April 2025 – if the artist does not die beforehand, as the publicity materials dryly state.
Bill Drummond is 60, and his name to me and others of a certain age will always be synonymous with a bunch of KLF hit records of the late 1980s and early 1990s, 3am Eternal, Justified and Ancient and others from The White Room, classics of their time.
But Drummond’s life since then has become almost an eternal art performance, and this exhibition which stays in Birmingham until June 14 will see him taking part in many strange acts involving people around the city.

He arrived in Birmingham on a raft made from what was described as his bed, but looked like a fairly rough wooden frame. He then created a sculpture of 400 bunches of daffodils under Spaghetti junction and carried 40 bunches to the town hall, where he gave them away to complete strangers.
The exhibition opening at the Eastside Projects gallery in Heath Mill Lane, Birmingham, was a strange affair. It strikes me that Drummond is very keen on exercising control.
He decided that from January 2012 he was only going to do 25 more interviews for 25 different publications, with the journalists only allowed to ask four questions each – this is in the rest of his life, so no interviews at the opening, though he was happily chatting to many people.
He also wrote his own piece for the Birmingham Post explaining his interest in the city and in Spaghetti Junction in particular.
At the opening he clambered on to his work desk, in the middle of the exhibition, to welcome everyone and thank them from coming – and didn’t start until the last person had been dragged out of the bar to hear him!
Another item in the exhibition is a screen with Drummond giving his 60-second opinion on various topics which he’s been asked to appear on TV to talk about but has refused – again showing him controlling what he can say without any awkward questions. Though the films are quite entertaining.
The exhibition’s most striking part is the huge house of cards made up of his paintings – more realistically placards of one or more words, painted Bob and Roberta-Smith style – which is as high as the ceiling in this large industrial space.
The 25 Paintings describe the acts he will be carrying out while in Birmingham, and then in other cities around the world while the tour progresses, including Berlin, Guangzhou, Memphis, Kolkata and Port-au-Prince. At the opening while asking people not to knock it over, he said he couldn’t wait for it to be in another venue where he could do just that.
His workdesk has been set up in the gallery, and one wall shows more paintings, and The 60 Posters explain aspects of his life, past work and plans for this world tour.
Local residents can look forward to being cooked soup, as well as cakes, and being able to borrow his boots to walk a mile, and may already have heard him around the city in the guise of The Man Who Blows His Horn and The Man Who Bangs His Drum.
He will also be working in the gallery, painting or knitting squares, on various dates during the exhibition where visitors will be able to meet him and talk to him about his work – details on his website here http://www.penkilnburn.com/events/events.php
It’s Conceptual stuff with a capital C, and my companion at the opening felt the influence of Yoko Ono, or at least a similarity with her work. However, it’s also quite good fun, so dip in, go see it and become part of the work.