Fleeting moments captured in time make up the opening exhibition of this year at Compton Verney art gallery in south Warwickshire.

Painting Childhood: from Holbein to Freud, and Childhood Now are two linked exhibitions, featuring what curator Dr Amy Orrock believes is the first exhibition on the subject to cover 500 years of works.

The starting point for the exhibition was three paintings in Compton Verney’s own collection, but these have been augmented with many loans, including 22 from the Royal Collection, the first time they have been shown in an exhibition about childhood. They do of course show higher-class children, and they remain the focus for most of the exhibition – not surprisingly ‘real’ poor children seem to rarely have been painted.

The exhibition starts with images from the time of the renaissance, when intimate sketches of babies and infants were generally made to help in the creation of religious paintings, their faces becoming that of Jesus or the infant St John the Baptist. There is a drawing by Francesco Salviati, Study of a Child, dating back to around 1500.

The next section on Royal Portraits looks at how status can be conveyed through the body of a child, and shows how iconography was often used. The children are also of course usually dressed in the richest type of clothes.

One of Compton Verney’s own paintings, Edward VI by Guillim Scrots, from 1550 (top), shows the young king holding a flower, while other flowers turn away from the sun and towards him instead, showing his importance.

The five eldest children of Charles I, by Anthony Van Dyck, from 1637 (above), shows the eldest boy with his hand draped casually on the head of a big dog, showing his future status and power to subdue all he wants.

There is a separate practice image of two girls from the right of this portrait, but tragically, as in quite a few of the paintings of children at this time, they weren’t to have long lives so are captured here at their best. Princess Elizabeth lived to be 15, and Princess Anne just three.

Dr Orrock said that paintings of children became more sentimental as time went on, as the painting Victoria, Princess Royal, with Eos, by Edwin Landseer shows. The baby is pictured with the loyal dog draped across her cot, and watched over by a dove. Queen Victoria and Albert made many delightful casual drawings of their own children, and a number are on show here, depicting a baby crawling after a ball, being bottle fed and other normal activities.

The exhibition continues into a section on Playing and Growing, showing children with toys or pets. Not all are joyful though, in an era with high mortality rates for children.

The Graham Children by Hogarth shows the lovely family, with a musical box, and a cat eyeing the bird. By the time it was finished in 1742 the youngest child had died. It is significant that the child is in a wheeled chair, on the way to the afterlife, and a cupid with a scythe is placed on a clock.

Jan Steen’s A School for Boys and Girls, 1670, is a rare image here showing a lower class of child, as two teachers supervise a class of unruly youngsters.

The themed section on Fantasy and Reality shows children being used as models for paintings. There is Gainsborough’s A Peasant Girl Gathering Faggots in a Wood from 1782, featuring a child acting out the poor scene, and little Penelope Boothby in Reynolds’s oil of 1788 showing the girl in a cute costume which went on to become a fancy dress outfit for decades. Perhaps the most famous of this section was John Everett Millais’s Bubbles from 1886, showing the child looking wistfully up at bubbles floating above his head; it was later used in a Pears Soap Advert.

The gallery on Family Life brings the works in to the twentieth century, showing artists’ children as their own models. Bonnard’s The Evening Meal of 1903 shows the family sitting down to their food, painted as though from another room glimpsing in to the peaceful scene. Camille Pissarro’s Jeanne Holding a Fan of 1863 is sadder, the girl slumped forward, not looking well, and she later died. Louise Borgeois’s etching shows the woman looking pained as she gives birth to her equally-sized child, as the artist tried to show the struggles of being a mother and an artist.

To complete the focus on childhood, there’s a further exhibition of works by three contemporary artists, Childhood Now. Matthew Krishanu spent a significant part of his childhood in Bangladesh and India and paints images of what he calls the two boys, him and his brother, from photos of that time. In Limbs they are up a tree, their legs mirroring its branches, and in other works they swim and climb on rocks.

Mark Fairnington paints his own twin sons as they grow up, their skin spookily white and their red hair a startling contrast. In many they look very similar but there’s always a difference, whether in hair style, or bruises on their legs.

Chantal Joffe has painted her daughter Esme since her birth, and they are often shown together too, as in Self portrait combing Esme’s hair. The girl is also seen playing with friends, and growing into the lanky girl now watching TV with her mum.

It’s a large and varied exhibition, with lots to see and read, which brings together interesting works in a good thematic way, and introduces three current artists whose work is also exciting to explore.

The exhibitions are on until June 16. 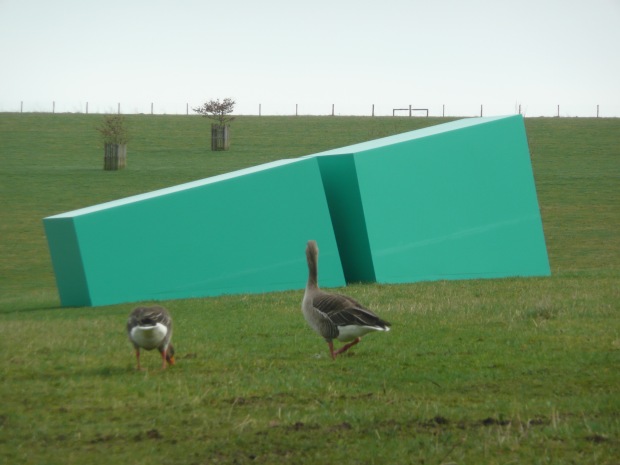 Dutch artist Krijn de Koning was commissioned to create the installation which is the latest outdoor work at the venue near Wellesbourne, Warwickshire, encouraging people to engage with the 1779 landscape designed by Capability Brown.

Green Dwelling is made up of 24 blocks of various sizes and shades of green in Old Town Meadow. Apparently the artist was inspired by the meadow’s history. It was once the site of a medieval village, Compton Murdak, and was later planted with elm trees which were lost to Dutch Elm Disease in the 1970s.

The blocks apparently represent ancient megaliths and the designs of Walter Gropius and the Bauhaus, and are arranged with mown paths to recreate the ancient village and also create new framed vistas which Capability Brown was known for.

My attempt to get close to Green Dwelling and look at Compton Verney from it was defeated by the squelchy mud after a few days of rain; hopefully I’ll get a second chance to visit.

Below, an artist’s impression of the installation before it was built

There are two must-see photographic exhibitions on in London now – unconnected apart from their use of black and white.

The Don McCullin retrospective at Tate Britain is on until May 6. It starts with his early works in London, including the fantastic The Guv’nors, an image of local sharp-dressed lads posing in the framework of a building. It was that photo which got him seen by the Observer and he has been in demand since.

The exhibition guide features a timeline of world events and conflicts which had an impact on McCullin’s life and career. He apparently is haunted by the fact he is known as a war photographer, but there are many images of conflict and suffering here. Each section on a new conflict he has photographed has a useful introduction explaining it and putting it in context.

There are many shocking images of injury and death, and captions explaining what McCullin was doing at the time of some of the photos, including a photo of a man who was injured in an explosion which he was also struck by, but the man later died. There are haunting close up faces of shock and fear around the world from Biafra, Cyprus, Congo, Ethiopia, Cambodia, Beirut, Iraq and more. Quotes from McCullin reveal how hard he found it to be a witness to their horrors, but saw his role to capture and record it.

McCullin also happened to be in Berlin when the wall was going up, and photographs its building, and civilians and soldiers on both sides. People wave across to family and friends they will be separated from for decades.

On visits home, McCullin captured Bradford and the North as the section is called. There are images of people living in poverty, and also homeless people in the East End of London, showing suffering isn’t always a long way from home.

The exhibition ends with landscapes, still in black and white, but bringing peace to the photographer and hopefully the visitor.

At the Hayward Gallery and also on until May 6, is an exhibition of photos by Diane Arbus, taken in New York City where she was born in 1923, and killed herself in 1971.

These photographs are smaller and the gallery emphasises there is no set route around the exhibition, or chronology to it. The images are displayed on pillars that visitors drift around and have to get close to, and there are photo titles but no more information. Arbus was clearly attracted as a subject to many of those on the fringes of normal society, as well as the woman wrapped up in a fur coat on the bus.

The people photographed are all in New York, or Coney Island, where the idea of a fun resort is tested to the limit. There are many photos of female impersonators before or after their shows. There is a little boy with a toy hand grenade in Central Park, and spooky looking identical twins. Eddie Camel, Jewish Giant, taken at Home with his Parents in the Bronx in 1970, stoops to fit in the room with his normal-sized mum and dad. Another man is covered with tattoos, and a dwarf woman cleans her house.

It’s a completely different exhibition to the McCullin one, but one which also shows us a lot about the variations of humanity.