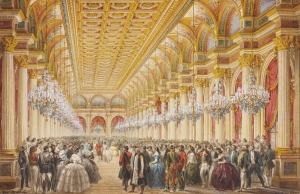 Queen Victoria in Paris features watercolours from the Royal Collection, and Picasso on Paper: Prints from the collection of the Museum Kunstpalast, Dusseldorf, is self explanatory.

The Victoria exhibition is an unexpected joy. It features 44 watercolours which are from three different sources. In 1855 Napoleon III sent Victoria 10 watercolours depicting her visit to Paris from 18-27 August that year, she then commissioned 15 more and the final ones were sent by Baron Haussman. They are seen together in this touring exhibition for the first time – and some have never been seen before in public. The occasion marked the first time Britain and France were fighting on the same side, in the Crimean War, and only 40 years after the Battle of Waterloo.

Compton Verney has done what it does well with this exhibition, presenting them in rooms painted a gorgeous deep blue, and with the low lighting required to protect them.

This is a collection where the names of the artists are less important than what is shown or represented. Indeed in some of them, the architecture of the buildings, inside and out, is what is particularly impressive – and apparently that was entrusted to architecture students to draw. There are scenes inside from various parties, including at the Hôtel de Ville, where there were 7,000 guests, and the high ceilings and decoration inside is impressively shown; regular artists painted in the people in the bottom part of the frame.

Victoria’s visit is depicted from her arrival in the Royal Yacht at Boulogne, through to a huge welcome in Paris, through a fake ceremonial arch built temporarily for the occasion. There are landscapes of Saint-Cloud, where she stayed, and which was razed to the ground when Napoleon III fell in the Franco-Prussian war of 1870, and some gorgeous interiors of the rooms, with Victoria and Albert shown reading in one. The detail of the rooms and of clothes and hairstyles will delight those interested in the era.

There’s a fantastic nightime painting of Versailles, a packed visit to the opera, and an exaggerated image of Victoria inspecting troops on a massive parade ground. The third room is dedicated to 19 scenes from the Hôtel de Ville ball. It’s an exhibition which is a delight in many different ways.

The Picasso exhibition features 70 works from the Dusseldorf collection, created over a period of 40 years from the 1920s-60s. The exhibition seems to work in phases, marked by Picasso’s changing women, and professional collaborators.

There is a portrait of Jacqueline Roque, who featured in more than 400 of his works, and also marked the start of his collaboration with Hidalgo Annéra.

There are some cute images of his young children, Paloma and Claude, the outlines of one created with his fingertips as he didn’t have tools to hand. Motherhood is an etching, with a few simple lines creating perfectly the woman and the young boy she is feeding. The Painter on the Beach from February 3, 1955 is a humorous work of several odd characters posing.

La Tauromaquia is a seires of 16 aquatint and sugar lift works showing simple scenes of bullfighting, and there is another series, Poèmes and Lithographs, featuring portraits and stream-of-consciousness text.

A move from Paris to the south of France resulted in a new collaboration with a potter there, and there are some works loaned from Leicester Arts and Museums Service, including the lovely Yellow Face of 1947, with the sweet face drawn with his fingers again.

So clearly a pair of exhibitions with no connection, but both interesting in their own right – and on until December 11.

Photographs of people facing despair and suffering, decades and thousands of miles apart, make up the engrossing exhibition The Human Document.

Subtitled The Photography of Persuasion from 1930s America to Present Day, the exhibition at the Mead Gallery, is based largely on works shown at a 1962 New York Museum of Modern Art exhibition, The Bitter Years.

This used 200 images taken in the 1930s by a group of photographers working for the Historical Section of the Farm Security Administration Programme, with the aim of proving to better-off Americans the desperate state of rural communities and the need for the New Deal programme.

During the Second World War 70,000 prints and 170,000 negatives were transferred into the Library of Congress in Washington (and many are now available to be downloaded).

This exhibition shows many of the images from The Bitter Years exhibition, alongside photographs by contemporary photographers also documenting sides of life that would otherwise remain hidden to many people.

The American photographs are fascinating. All small and black and white, they show an unimaginable life. In the first image inside the door, by Arthur Rothstein, two wagon wheels lie in a pile of dust in front of abandoned farm, making the point that the resident of the shack behind isn’t going anywhere useful on their cart any more. Rothstein’s other images include an animal skull on cracked ground, and a withered crop. He also showed people being forcibly moved from living alongside a road to land between the Mississippi and the levee, and abandoned furniture of those on the move.

Marion Post Wolcott’s Old Negro shows a miserable man picking at a thread on his worn clothing. Ben Shahn has captured images of destitute Ozark people in Arkansas, including a girl clutching a damaged doll, itself wearing rags, and a little boy cuddling two kittens, his clothes as ragged as the those of the doll.

Dorothea Lange’s many images are some I kept returning to. She has photographed a sharecropping family on the move, mum in a bonnet clutching her baby, a sad little boy and anguished father.

She also pictured black cotton pickers, who worked from 6am-7pm for $1, and the image is hung next to another of hers, showing a fat white plantation owner with his car; the documentary and persuasive nature of the photographs is important to note too.

However it wasn’t as simple as black vs white; a white tenant family’s home is shown, a plain bed on the porch of a house propped up with bricks. Lange is particularly good at capturing images of young mothers, old before their time, trailing across the country with their husbands and children in search of any sort of better life. 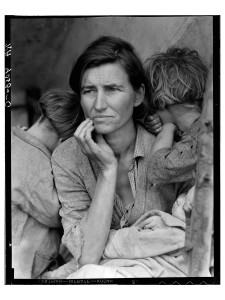 Her photograph of the 32-year-old ‘migrant mother’ of seven children, Florence Thompson, pictured (above) with a baby and two young children in a pea picking camp, became a famous image, her tough life leaving her looking more like 45, and is included here, as well as a fascinating interview with Florence in the accompanying free catalogue. Despite her incredibly hard life she lived to 80, though her own mother had made 108.

Lange also photographed an old woman in Kern County migrant camp in California, her only comfort a rocking chair in an open-fronted tent.

There are countless images here all showing homelessness and suffering seen many times around the world, including of course now on the daily news.

The works by contemporary artists are mostly also from the west, and show a side of life missed by many. Three sets stand out.

Chris Killip’s photographs from the north of England from the 1970s-90s, show bleak back streets in Tynemouth, and what appear to be travellers but are specifically sea coalers, people who harvest then sell washed-up coal. Their messy camp and a little girl playing with a hoola-hoop next to a burnt-out fire and wrecked furniture document a difficult way of life at the time.

Paul Graham’s colour collection, Beyond Caring, is made up of covertly-taken photographs of people in social security offices. Fed-up faces, and bored body language dominate here. People forced into a community in the offices where they don’t communicate with anyone.

Richard Billingham’s Ray’s A Laugh series are painful for the knowledge they feature his own family. His dad falls from a chair in their cramped flat, or glares at a cat hissing on a cabinet cluttered with ornaments. His mum hand feeds a kitten, and his brother licks yoghurt from the lid of a basic brand.

Different times, and different viewpoints set the more recent works apart, but it’s a show not to be missed for work by talented photographers capturing images from the times they lived in, and looking to tell a story to others.

Outside / Inside / Out is the title of a new exhibition by two Coventry-based artists showing their work in Warwickshire.

The works, on show at the Lewis Gallery at Rugby School, only until October 13, are by Mandy Havers, a Senior lecturer in Fine Art at Coventry University, and Andrea Hannon, who completed her PhD at the University in 2014, and was also one of the artists highlighted in New Art West Midlands that year.

They explain the title of the exhibition as “the notion of external and internal space as it is found, negotiated and experienced both physically and psychologically is an interest both artists share”. However their works are very different.

Mandy’s works largely concentrate on the human body, often in its most physical form, but with what should be inside and unseen very much on show. Some of the works appear beautiful but in a gory way; Bloodpool features a doll-like figure sitting on a red shiny ball, but then you realise its guts are spilling out of its middle and making the pretty lines down the ball.

Gold Head is a tightly stuffed leather gold head. Last Supper is a large leather and mixed media work, with a Jesus face looking out, some shiny bling, and then you realise the central body is a large loaf of crusty bread.

Dreamer is a work seeming to feature a foetus attached to a head, and other works show detailed drawings of cut-away people, their internal organs and veins visible. There are also a number of tables showing collected objects, Dreamworld from this year, features odd collections; dolls with outsized gloves suck on their hands, eyeballs, and other items relating to the body. The whole body of work is accomplished, attractive and also disturbing in parts.

Andrea Hannon’s works also vary between some on the wall and others free-standing. Her works concentrate more on the idea of physical spaces and the idea of home.

Postern is two landscape paintings, with her own collaged intervention of what looks like windows and walls.

Cluster I is a set of three 3D collages in Perspex and wood, so you can see inside to tiny figures cut from old books, wearing masks here, and with a city skyline too. In Cluster II people gather around a desk. Shoot features four images of what look like a woman in an attractive dress, but with swirls of pattern around her, distracting from the figure.

In-her is a roughly-made dolls house inhabited by cut-out figures, including one that looks like a woman doing the ironing, and in one part of the house the floor has come up in strips, and the front is completely detached, suggestion traumas and frustrations of home. Two other works feature homely items such as lampshades and wallpaper in unusual settings on the floor.

The very different works seem to complement each other, creating an interesting and thought-provoking exhibition.

*The Lewis Gallery opens weekdays 2-5pm, and the exhibition closes on Thursday, October 13.