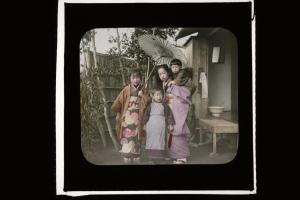 A Japanese-themed exhibition in Warwickshire takes a look at life in the country more than a century ago.

It does though seem a bit confusing. Journey Through Japan is a touring exhibition on loan from Horniman Museum & Gardens in London, complemented with some work from Leamington Spa Art Gallery & Museum’s own collection, for the show at the gallery.

It is described in the press release as a selection of “intricate and beautiful lantern slide photographs taken in the early 1900s which allow you to experience the stunning landscape of Japan during that era”, taken by Marjorie Bell and her cousin Leslie, when they travelled around the country in 1903 for two months. They had left Marjorie’s home on a sheep station in Victoria, Australia, to travel with her mother Hester.

The information in the gallery said Marjorie, who was only 13 at the time, had her photos processed in Japanese studios. She wrote a detailed diary, and the pictures in the exhibition have her interesting descriptive captions alongside them relating to the image.

What causes confusion however is that some of the photos were clearly not taken by Marjorie and her cousin, which raises the question of whether any of them were, and why this isn’t specified. (See bottom and the helpful comment below). There is even one illustrating people in Japanese costume of the day in snow, when Marjorie wasn’t there.

There is one attractive picture of a young family, the oldest child carrying a baby on her back, and Marjorie’s comment is that this was something they saw frequently amongst young children. Some other young children are featured and after Marjorie’s diary quote about children, there is a comment that she may not have seen children this poor which raises the issue that she couldn’t have taken that photo.

She travelled to the popular island of Miyajima and there is a photograph of people at work, with hand-pulled carts, big straw hats to keep off the sun, and young children accompanying them. The famous entrance gate to the Itsu-kushima shrine, which appears to float on the water when the tide is in also featured.

Some dancers in a hotel are shown, and there are a number of attractive countryside photographs; a huge lake, and some gushing waterfalls in very green and tree-filled countryside, a part of Japan not so often pictured. An avenue of enormously-high bamboo trees has a couple of people wandering down the middle to show the scale, and in Nara small deer wander around waiting to be fed, the same as today. In this image a brightly-coloured patch of orange leaves on a tree catches the eye. Nagoya Castle stands proud and attractive, five storeys high, and some streets capture people, shops (with huge signs outside showing what they sold) at this period.

A photo of Tokyo is very different from today, with lots of low-level buildings and fields, but a sumo wrestling match looks similar.

In Nikko, Marjorie’s diary commented that she wished she’d been able to see the attractive red bridge which had been washed away in high waters – so the picture of the red bridge intact was clearly taken by someone else.

In one of the last ones, Mount Fuji is artistically reflected in a lake where there is a solitary fisherman.

The confusion over how many or whether any of these photos are taken by the young Marjorie detracts from simply being able to enjoy these attractive moments from this period in the country’s history.

The gallery has added some of its own Japanese-related items to the exhibition too. These include some dolls, an Oriental-building shaped box, and a Satsuma jar, with an attractive picture on top of a bird taking flight.

There are also a number of woodblock prints, including several by Kikugawa Eizan, on showing what is described as a tipsy girl dropping her drinking cup, and also a couple by Kitagawa Utamomo II depicting a high-class courtesan being escorted through a crowd by a servant and her apprentices. They are all worth seeing and it’s good they have been given a chance to come out of the stores.

*It has since become clear none of the photographs were by Marjorie but from the Horniman Museum’s own collection of lantern slides,  taken by Frederick Horniman himself. 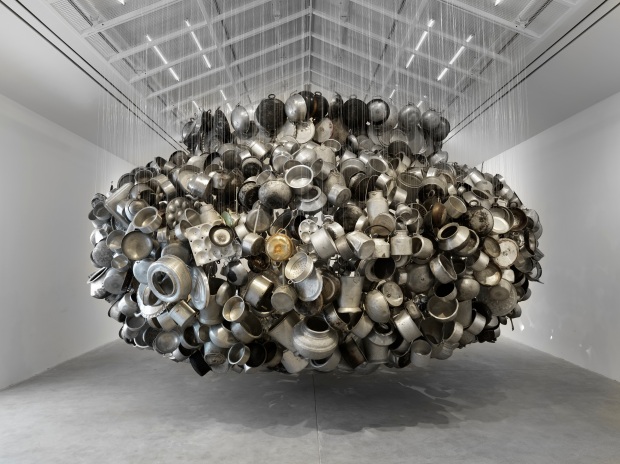 Once on holiday in San Gimignano, I wandered down the crowded, sweltering hot street, and caught a glimpse that made me stop, and slip into a cool, unknown space. Hundreds of silver cooking pans and tiffin pots were arranged in a beautiful, tumbling art work. On the floor were rows of low metal stools arranged as if ready to seat 45 for a traditional Indian meal in front of round silver trays full of bowls.

There were other items too, but it was those two which took my breath away.

I made a note of the name of the artist and felt entranced by the contrast between the shiny but utilitarian Indian utensils turned into art works, and the expensive designer shops in the Tuscan tourist mecca outside. It was 2008 and I didn’t think I’d ever see his works again

Since then I’ve accidentally come across an enormous nuclear explosion of his stainless steel utensils filling a huge space at the Tate in London – and now he has a solo exhibition in Coventry until March.

Subodh Gupta – the name copied down several years ago – even visited the Mead Gallery at the University of Warwick for an In Conversation with Curator of the Mead Sarah Shalgosky before the official opening.

The exhibition itself shows relatively few pieces in the large space. One of the larger pieces, which I had seen in Italy, is School, a work showing five rows of nine low stools, with a table in front set with a sparkling thali dish ready for a meal. Each brass stool is cast from that of the artist’s father, with patterns and initials clear to see on it.

This combination of homely items and mass-produced pieces is typical of Gupta’s work. In the In Conversation he ran through more of his art works from over the years that reflect that.

He showed an image of 29 Mornings, from 1996, which consisted of wooden stools with items from everyday life placed on top; they were memories of life in the village he grew up in, when he had moved away to the city. Similarly, small bundles of sticks used to brush teeth in the village, then discarded, are turned into an artwork. He said: “When it’s been cast in aluminium it becomes closer to me and further away from the people who are now not going to use it.”

There Is Always Cinema (V), which was also made specially for the show I saw at Galleria Continua in San Gamignano, consists of three ‘sack trolleys’ used to transport goods around. One is in its natural state, one cast in bronze and one nickel plated apparently suggest the idea of worn items being able to move things around to a brighter part of the city.

Another piece that is in the Mead show is Two Cows, a pair of bicycles cast in bronze and hung with chrome milk pails. As he said before the opening, in the village he would get milk from the cow, but in the city it was carried in pails on bikes, hence the name.

The attention-grabbing work is clearly Chanda Mama door ke, or Far Away Uncle Moon Calls, which is a reference to a Hindi children’s nursery rhyme in which the child is talking to the moon as though her uncle. The work consists of dozens of used cooking pots, some very used, burned and bent, hanging from the ceiling on fishing line, looking from some distance like a re-imagined moon. It’s spectacular but in a way simple too.

Gupta trained as a painter and there are three paintings in the show, close ups of used pans or plates.

One of his themes in his work he explained is the cosmic and the everyday, and “I can see the universe in my plate.”

Some of his new works include two Pressed for Space exhibits, consisting of old cooking pots crushed into rectangles, with bits of cloth mixed in with them.

He explained that in some larger pieces eyes look out at the unexpected viewer; was he trying to shock Sarah asked. No, he said, he didn’t want to do that, but he liked to mix performance and sculpture and had a strong sense of the audience looking at his works: “We live in shock, we don’t know where we are going.”

Other topics and works covered in the talk included God Hungry, a huge work in Lille featuring cooking pots seemingly cascading through three windows of the church, and This Is Not a Fountain, a mixture of pans with taps poking through, focusing on, Gupta said, the big issue of taps being left running in India parks. 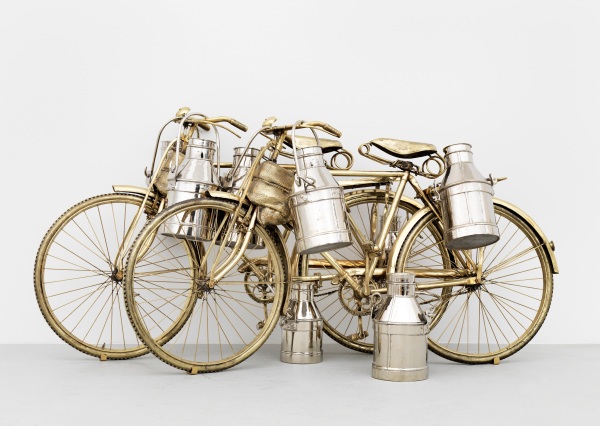 He has also been a performer, and showed a clip from a video which was engrossing and also gross; he was he said “showering in cow shit”, and he’s last seen in it, naked and coated in the brown stuff walking out of a room. He said it related to the importance in India of cow dung, used wet for painting and rituals, and dried and used as fuel or for building. His work My Mother and Me from 1997 was a creation of a cow dung tiled house.

There was some discussion too about the relationship between his works and that of Duchamp, though he reiterated there was no connection, as he said Duchamp made an object into an art work, but he, Gupta, made an object into a material and in that form becomes the art work. It was an interesting discussion and one that could go on.

It felt like there could have been more at this exhibition, but I have been spoilt by seeing some of his largest, most spectacular works before. The exhibition – on until March 11 – is still definitely worth seeing and a breath of fresh air in he 2017 exhibition scene.

In the bleakness of January, Deasil gallery in Leamington is trying to cheer us all up with an exhibition called Begin with Beauty.

It consists of work by a number of their regular artists, plus the back room is taken over for the first exhibition there held by Rachel Weston, who lives near Leamington.

All her works on show are land or seascapes, some local, such as Great Alne, with beautiful browns and earthy colours in an autumn view, and others featuring the dramatic countryside and skies of Scotland, which Rachel visited last year 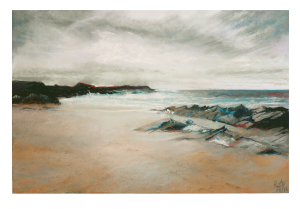 She said: “I do photos and sketches and I have to have been somewhere. I used to be far more abstract and I am now looking for primary symbols within a landscape.”

Her pastel works include Machir Storm, with dark skies heavy over some small white cottages, and a large sweep of beach, and Saligo Bay, a beach with dramatic sharp rocks, and a different cloudy sky.

Other artists featured in the exhibition include Cult Zero, who had his own show last year. There are several large digital prints of his strange creatures, and some smaller animal-focused one.

Sonia Bublaitis is showing several brightly-coloured paint on Perspex pieces including Serendipity and Blue Waves, and Coventry-based Nancy Upshall has some of her familiar colourful abstract paintings such as Poseidon’s Kingdom, a look into an underwater world.

Jenny Clark has several mixed media works featured, including The Joy of Farthingstone, an attractive if rather idealised-looking village, and Hakeshead, churches and houses on a hill.

It’s a colourful, cheering exhibition to start the new year, and a good introduction to Rachel Weston’s work.

The exhibition is on until January 26. 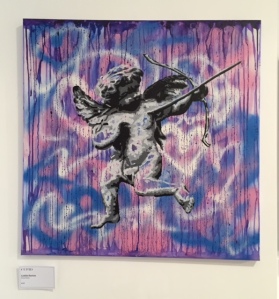