The Music Room, 1859, JAM Whistler @ The Hunterian, University of Glasgow

Art where the greatness is in the detail is the focus of the new exhibition at Compton Verney Art Gallery in Warwickshire.

Entitled Whistler and Nature it looks closely at the work of James McNeill Whistler, the American-born but generally European-based artist who was active in the latter half of the nineteenth century.

However after looking round a lot of the exhibition it does raise the question of how closely the title relates to what is on show. In the catalogue introduction Compton Verney Chief Executive Steven Parissien says that Whistler’s “close observation of nature and its moods underpinned his powerful and haunting visions of nineteenth century life”. And there are many seaside scenes, but also the Thames River in built-up London, indoor paintings and parts that focus on people and nudes in particular, and it’s hard to relate the title that well back to the exhibition.

The show starts by telling us about Whistler’s background in a family of soldiers and engineers, and how he went to the military West Point Academy in 1851-54, and learned to draw maps. There are some examples of his topographical works on show.

In 1855 he moved to Europe, and lived in England amongst relatives including a half-sister. There are some charming early etchings from London, including the 1859 The Music Room, showing the family sat around reading or knitting, a collection of lines bringing them to life. A Greenwich Pensioner lounges on the grass in a top hat in another etching, and the grass is patterned in swirls in Greenwich Park from the same year.

A room is dedicated to etchings of the Thames, focusing we’re told on line and topographical accuracy. There are fantastic historically-interesting views of water, warehouses, and boats with tall masts. In Black Lion Wharf workers are rowing boats around, or sitting after some task. We are even shown how this particular image is on view in the background of the famous painting of Whistler’s mother on show at the Musée D’Orsay in Paris.

The influence of Hiroshige is very apparent on Whistler, as on many international artists at the time, and there are a few of the Japanese artist’s works on show to make this clear. There is even a small, beautiful painting by Whistler of women looking over the smog-covered Thames with dresses and parasols which look like those of Japanese women.

In 1879 Whistler fled the fall out of a court case to go to Venice, and one room is dedicated to a small number of these works, and they are again detailed and charming, showing typical scenes but with his own style; one is unusually an upright view of a favourite view, and there is The Traghetto no2, people having a drink with a gondola only just visible in the background. One etching is highly detailed and floral, another is very pared back and powerful. 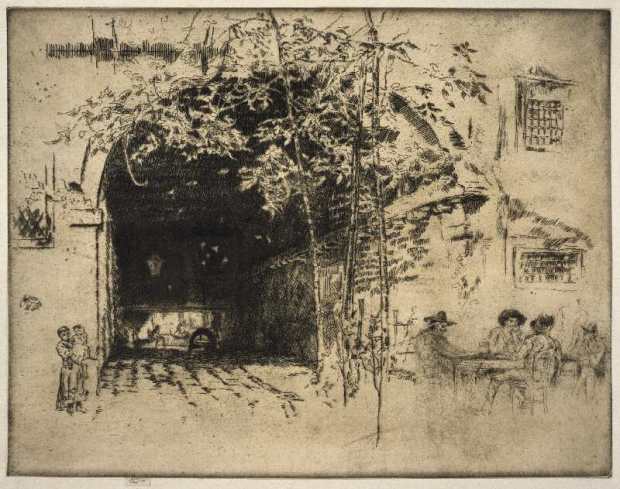 The Traghetto, No2, JAM Whistler @ The Hunterian, University of Glasgow

There are two sections which don’t seem to fit in with the rest of the show. In Whistler in the Studio, we are invited to admire his draped figures, influenced by classical Greek designs and also Japanese art again, rejecting the earlier Courbet-inspired outside paintings and etchings. A later sections returns to draped figures and nudes, where he has obviously decided less is more, and drawn a veil over the details of his female models’ bodies. It is in the former of these sections that the largest painting in the exhibition is on show, a lovely painting of a woman striding along, her scarf billowing, painted in the styles that Whistler was practising, but by his friend Albert Moore. It’s a brave decision to include it as it overshadows some of the works nearby.

Whistler’s Travels takes us away to the 1880s-90s, and trips to France and the English coast, including St Ives, and lots of small watercolours and oils which are very successful. A few areas of colour or a few small lines portray ships, people and the landscape. In Grey and Silver – North Sea ships battle on beneath the grey sky, and the Bathing Posts, Brittany, show the sea where people were beginning to enjoy bathing.

Some lithographs of Paris are excellent, just a few lines bringing to life people in the Luxembourg Gardens, his wife gardening or people visiting.

Whistler returns, as his wife lay dying, to depicting the Thames from the window of their room, showing people going about daily life beside the river, or crossing bridges, as his viewpoint remained little changed.

It’s overall a fascinating exhibition and a glimpse into the skilled smaller works of a painter better known for his larger, impressive paintings.
*The exhibition is on until December 16.

An amazing selection of black and white photographs have a great impact in a Warwickshire gallery, far away from their source.

Introducing America to Americans – The Farm Security Administration Project, 1935-1944 is the title of the exhibition at The White Room Gallery in Leamington Spa.

The photos may appear familiar if you visited The Human Document exhibition at the Mead Gallery at the University of Warwick back in autumn 2016 – they were previously part of that bigger exhibition.

However here in the smaller space it’s easier to focus on the detail.
In 1935, The Farm Security Administration Programme commissioned some photographers to document the plight of rural workers in America to enlighten the public and politicians about the living conditions of the working classes during the Great Depression. They brought an awareness of poverty to a much larger audience.

Amongst the photographers featured is Dorothea Lange, and her photograph of the 32-year-old ‘migrant mother’ of seven children, Florence Thompson,(above) with a baby and two young children in a pea picking camp, became a famous image, her tough life leaving her looking much older than her age.

Lange’s other photographs here include many people with the pain of poverty on their faces; a sharecropping family on the move, mum in a bonnet clutching her baby, a sad little boy and anguished father. There are black cotton pickers, who worked from 6am-7pm for $1.

Other photographers involved include Arthur Rothstein, whose works include School at Alako, where youngsters sit around a heater while a woman writes on the blackboard; learning still trying to take place amongst the struggle to survive. Russell Lee also photographed a mother teaching her children numbers to help them back to a better life. Lee’s photograph of a former slave woman pictured in 1941 is also shocking, a reminder that slavery was not so far into the past.

Families have a whole street of furniture lined up one side of a roadside stream they cross with planks, a tragic place to have come to a stop. Amongst it all, children create their own playground from an old wagon wheel placed on something to become a merry go round.

There is just one of every image on sale at this moving and fascinating exhibition of silver gelatin prints, which is on until November 17.

A trio of exhibitions at Rugby Art Gallery & Museum is an odd but entertaining grouping.

The Eadons of Hillmorton Road is a collection of photographs from an Edwardian family showing their life from before the First World War. The photos on show come from 300 glass plate negatives taken between 1910-18, and passed on by Chris Eadon to his son David, and donated for this show.

There are scenes of relatives and friends posing for photos in the house and garden, and on holiday in a recognisable Llandudno with the beach, pier and Great Orme visible, along with minstrels from the town’s show on the promenade.

The show is also divided into sections, showing amazing fashion changes through this period, from young women in fashionable hobble skirts, to older people in what look like Victorian leftovers, with floor-length skirts and astonishing fox fur stoles.

There’s a day out at an airshow watching monoplanes watching aviation pioneer Bentfield C Hucks, taken at Lilbourne Camp near Rugby in 1913 and Eastlands show 1912.

A family member is seen on a Triumph motorcycle, which started to be made in Coventry from 1902. The war then intervenes and there are photographs of men, earlier carefree, on horseback and in uniform, and unknown women dressed as nurses.

It’s an interesting insight into a Rugby family’s lives.

Secondly, there is a small selection of work from the Rugby Collection, focusing on people and place. As ever there are good works on show; there is a yellow-themed Graham Sutherland landscape from 1940, and two contrasting but both attractive images of Paris by Sine McKinnon and Martin Norman Bell. Valerie Thornton’s The White Church shows a haunting white building through trees.

Two new acquisitions are photographs by Andrew Jackson. Amy At The Window #1, Dudley, England shows his mother looking through the pane deep in thought, or as the accompanying information tells us she has dementia, maybe lost without thoughts.

The other image is The Sea #1, Montego Bay, Jamaica, showing just a huge area of sea, near the homeland the photographer’s mother has always missed and pined for.

The third exhibition is The Queen, The Chairman and I, created by Kurt Tong, and featuring photographs he has taken, and old pictures from his family’s past. Tong was born in Hong Kong before the Chinese had it back, but has grown up in England and the exhibition (and its extensive written guide) explores the influence of Queen Victoria and Chairman Mao on his family.

His own photographs tell the story of this, and also show images of Hong Kong and their historical importance, and some quite astonishing tales come out of suffering and loss. Two family albums belonging to Tong’s maternal grandfather Chung Zak are also shown in full, to demonstrate as Tong said the change in the man’s life that was beyond his control; failed businesses, fleeing China, family life falling apart.

It’s a moving and revealing exhibition.

All three are on until October 27.

One of the many events on to mark the century since the end of the First World War is an exhibition at Leamington Spa Art Gallery & Museum, entitled Are You In This?

Ending significantly on November 11, the day hostilities ceased in 1918, the exhibition aims to tell the story of Leamington Spa and its people during the war.

Not only did 2,500 local men serve in the war, 500 of them were killed, and the town had troops billeted in the area. Injured soldiers were treated in local hospitals, and women temporarily stepped into what had traditionally been made jobs sich as train drivers, postal workers and firemen. Local firms, such as stove maker Flavel, turned over instead to making shells.

The exhibition includes this sort of information, including some local photographs, such as troops parading and injured patients.

There are medals which were awarded to local people for their bravery or service during the war, and cartoons by Captain Bruce Bairnsfather, who served in the Royal Warwickshire Regiment from 1914-15 before he was hospitalised with shellshock and hearing damage from the Second Battle of Ypres. He went on to create cartoons based on life in the trenches.

The exhibition also includes a number of First World War posters from the gallery’s own collection, though they are not generally specific to Leamington.

There are some interesting items and bits of information, but overall the exhibition feels a bit thin, and like there should be more stories to tell here.