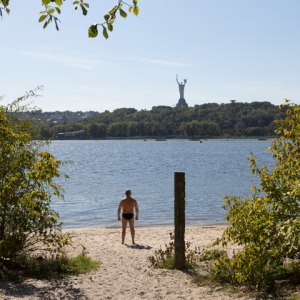 Above, Man Versus Motherland by Dean O’Brien, at the Barber Institute
Four Coventry University graduates are showing work in top Birmingham art galleries as part of the New Art West Midlands initiative.
They are among 22 recent graduates chosen from West Midlands university art schools for the exhibition.

At the Barber Institute there are photographs by Dean O’Brien which are part of a project called Uncertain Future, which looks at the social changes and challenges that Ukraine has experienced in the 20-plus years since it gained its independence from the Soviet Union.
They include a photo of a man about to go swimming in a lake, dwarfed by an enormous statue which is much further away. There is Room with a View, endless rows of identical flats, and several which comment on gender relations and advertising in the country.
One photograph shows an advert on a bus where a made-up little girl sucks her finger while admiring a plate of sausages, and in another a bowed elderly woman, dressed up against the cold, walks past a poster of an attractive young woman, designed to attract football fans in 2012. Other women are pictured, their eyes hoping for rescue from western men. The photographs tell a story and are skilfully taken.
Sally Larke creates ceramic, porcelain pieces and those for her final year project commemorated the life of her brother David who died from epilepsy in 2003. This poignant work, including pictures from his life, is on show at the Barber, with another set of ceramic pieces on show at Birmingham Art Gallery & Museum.
Also at Birmingham Art Gallery are prints and etchings by Lizzie Prince, who hopes to pursue a career as an art therapist. Her sharp, concise images are inspired by Brutalist architecture.
Corey Hayman’s work at the same gallery challenges ideas by using old 1940s film footage and cartons condemned for using racist imagery of black people. She has created A Corrput Beauty, a book of colourful squares from the film, and also shows one cartoon with a square of it blacked out to see if that detracts from the tale. It’s clever manipulation of one image to create an entirely different one.
Both the exhibitions are on until May 19.