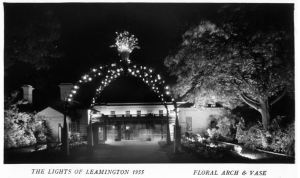 Back in the 1950s, Leamington’s response to the Festival of Britain was its own festival called The Lights of Leamington, which apparently drew 300,000 visitors to the town. Jephson Gardens was lit up with thousands of coloured electric lights to create a wonderland, with the event so popular it was repeated up until October 1961. It only came to an end then as it was a victim of its own success, increasingly costly to run, and with complaints about visitor rowdiness. There was even an attempt to revive it in the 1980s but it was too expensive.

So as the gallery’s new exhibition Lights of Leamington was inspired by it, I’d expected to see more photos of this amazing creation, and it was a bit disappointing to find only one cabinet of black and white photos, showing what looks like lovely scenes of characters, creatures and lit-up trees and walkways.

The exhibition, described in its own publicity as eclectic, has been selected and curated by Birmingham-based artist Stuart Whipps who has gone through the gallery’s collection and followed the theme of light through it.

This means the rest of the display has this general theme. Whipps himself has added one work involving burned bits of photo negative found in the collection.
There are paintings, including some of people or things lit by candlight; Godfried Schlacker’s self portrait by candlelight is a striking work dating back to 1695, and Christmas Roses by James Valentine Jelley from 1856 shows the flowers gently illuminated.

A painting entitled Moonlight showing two boats under the night sky was one donated by Alderman Holt, the subject of a previous exhibition, and a travel poster shows the bright lights of the Ostend Casino as a draw to visit Belgium.

Many people have happy memories of Leamington’s Toytown shop, and Stuart Whipps has found the letters from its sign in the archive, and displayed them with LED flashing lights included in the exhibition, but in the order they came out of the storeroom, so not spelling out the word – still it’s a good reminder!

Other additions include metal candlesticks and a collection of photos of streetlamps in Leamington.

Eclectic is certainly one word for this slightly strange connected, yet rather disconnected, exhibition. Hopefully visitors will come forward with more memories and pictures from the 1950s show for a follow up.

*The exhibition runs until April 15.