The best travelled shed in the Midlands is back in one piece for another exhibition – though it was nearly claimed by Father Christmas!

The shed, officially known as the Coventry Centre for Contemporary Art, was originally used in a Bob and Roberta Smith installation at the Mead Gallery at the University of Warwick in 2009, and was then left for local artists to use. Coventry-based Martin Green and Lorsen Camps used it to exhibit with Joanna Rucklidge in Earlsdon, and the three reunited for an exhibition in the shed, rebuilt at The Herbert in Coventry, this summer.

It has now passed on to the Peapod Collective, based at the Pod in Lamb Street in Coventry, and has landed, in Tardis-type style, at Fargo in Far Gosford Street. However Fargo traders thought it could have a festive use as Santa’s grotto, but it was soon retrieved for its proper purpose.

Exhibiting in it are Eve Hyde-Davis, who graduated from Coventry University this summer, and sound artist HKid.

Eve is also one of three artists using studio space at the Pod which is made available to recent graduates of Coventry University’s Fine Arts degree course. Her work on show at Fargo was also in her degree show in the summer, but there it was hung up high, with other pieces around it, and at Fargo it fills the small shed space, and you just have space to walk around it. The work consists of several large sheets of paper, painted black and with different angular shapes cut out of them.

At a low-key opening Eve said they were typical of her work, “sterile, geometric and lacking in emotion”, which might partly fit in with her interest in brutalist architecture.

“This one was in the bigger show but it was in a much bigger space. It’s really interesting here, it’s got a different feel,” she added.

Eve will be working in studios at the Pod this year, alongside Lauren Heywood and also Jennifer Shufflebotham, who has been selected for the New Art West Midlands 2015 exhibition.

*Eve and HKid’s exhibition at Fargo continues until the end of January, and will be open Thursdays and Fridays from 5-6.30pm, and weekends 2-4pm. 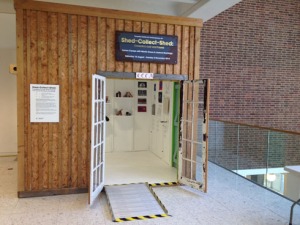 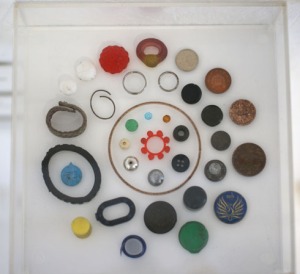 The Shed – Collect – Shed exhibition in The Herbert, and Joanna Rucklidge’s miscellaneous collection

Visitors to the Herbert might wonder why a rather basic-looking shed has suddenly appeared upstairs on the landing.

But it’s a well-travelled shed which has already had several lives as an art gallery, and has re-emerged from artist and curator Lorsen Camps’s Coventry garage for this outing.

The shed is officially known as the Coventry Centre for Contemporary Art, and was taken over by Lorsen after it was used in the Bob and Roberta Smith installation at the Mead Gallery in 2009. Its first appearance was then in the grounds of Earlsdon Primary School, showing an exhibition of found objects by Lorsen, plus Martin Green and Joanna Rucklidge. The three are reunited for this Herbert exhibition.

The show is called Shed – Collect – Shed, playing on the different means of the words, but Lorsen explained the idea is to explore the relationship between their own found objects, and the Herbert’s collection of Coventry-related pieces.

Lorsen said: “We are bringing found objects which are the collection of three artists into the museum setting and starting to play with ideas of what the Herbert specifically does. I met with the Herbert’s collections curator Paul Thompson and he was explaining the Herbert collects Coventry’s identity and that was quite interesting.

The idea is Martin and I collect in Coventry in a different way. Joanna has come down from Sheffield to do a different thing but it’s all related to Coventry.”

Martin and Lorsen also took a trip to one of Coventry’s twin cities, Cork, to create some of the works in the exhibition incorporating photographs and found items, Paradise Disregarded, Paradise Reclaimed, which also uses things found in the Paradise area of Coventry.

They include clips and tiny pens, plus against a Gothic-type image there’s a spooky white eyeless doll, plus a black plastic avenging angel.

Joanna visited Coventry in June and said she ended up with aching thighs after bending down at least 200 times to pick up circular items she wanted to use in this exhibition, noticing a theme from Coventry and its history.

She said: “I was inspired by trying to collect something from the streets of Coventry. The ring road dominates, and there’s the history of Coventry, of clock and watchmaking, cars and cycles and so I thought I’d use all sorts of circular pieces.”

She found all her pieces on four circular walks on one day in June, and has used them in various ways. They are displayed in similar groups, such as clear bottle lids, and metal bottle lids, some just shown and others in colourful screenprints on paper.

Lorsen said about his work: “What I am showing them is an extension of what we showed in the shed. I have played around with the ways the Herbert presents its objects.”

One item, My Fond Knotted Crisp Packet Collection (below), is deliberately like an old-fashioned display board of butterflies pinned to a cork board. A display of Mini Beasts includes plastic animals and toys, a special interest of Lorsen. Standard Triumph uses a row of matchboxes to show small plastic toys. A window frame has been turned into a modern-looking lightbox display with a sea horse air freshener and hairband around it. 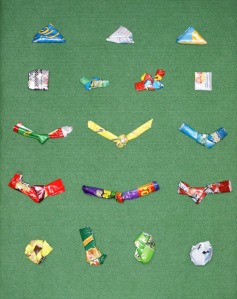 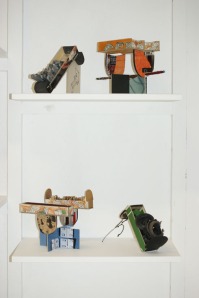 Another item is an old found wooden door with small, colourful items stuck neatly to the back of it. Another consists of boxes with bits of jewellery and other sparkly items in them. A found fridge shelf is used to frame a collection of pens and pencils.

Easy to miss, over the door are some trophies, a swan statuette and a plastic flying bat, both in gold-sprayed frames which on closer inspection come from the polystyrene packaging from white goods.

Martin Green’s new work is called City Box (above), and there are 12 boxes, all arranged on some shelves. He said: “It’s based on using boxes as a sculptural form. I was trying to give some sort of personality to the piece so I have collected things to do with travel.”

Each box is held up by a shoe heel found by Martin, or a stand made by a cigarette packet, colourfully wrapped with material from a found umbrella. There are different things in each one. They include wheels from suitcases, zip ties, rucksack buckles, bits of lighters, wheel weights and sunglass lenses.

There is also a DVD slide show with images of 100 items in situ flashing up on the wall outside the shed.

Lorsen admitted he was quite pleased to have the shed out of his garage after three years, and this may be its last outing, at least with him: “We are thinking about what next and we are seeing if other people are interested in taking it over.”

* The exhibition is on until November 2.