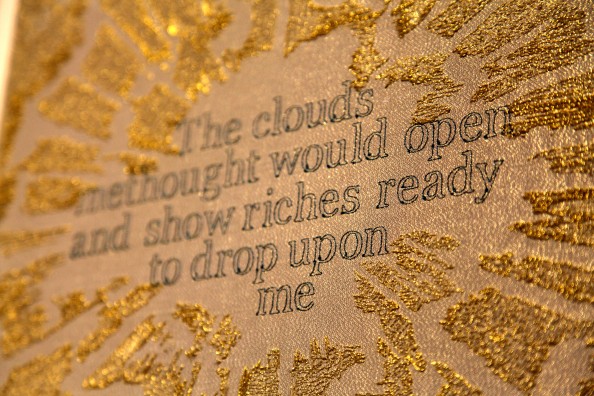 The words of the Bard have been held up to scrutiny in a new and interesting way for a Royal Shakespeare Company exhibition in Stratford.

The Paccar room at the theatre has seen a succession of interesting exhibitions from what might seen a limited source, and this is another one.

Writers, actors and poets have been asked what are their favourite lines from Shakespeare, and why they hold them dear, then they have been interpreted as an artwork by a range of artists and craftspeople from different disciplines. The small exhibition has produced an interesting range of work.

In a small side room, playwright Tanik Gupta’s choice from Othello, Act 5, scene 2, features a work by sound artist James Bulley combining Paul Robeson playing the part in 1949, over a musical composition by Samuel Coleridge-Taylor, and a printed representation of the sounds.

Actor Hiran Abeysekera chose lines from Cymbeline and illustrator Jonny Hannah has interpreted them with what looks like a small toy theatre, bright and colourful, with the lines printed on them.

Author Jeanette Winterson picked lines from Act 3 of The Winter’s Tale, and Harrington and Squires have printed them in an open book, large and standing on a wooden circular plinth, explaining their meaning around a suspicion of adultery. Fellow author Margaret Atwood picked Prospero’s musings on life and death …”is rounded with a sleep” for her piece, and it is illustrated by Lara Harwood’s projections of soft images on a light material screen, disappearing into thin air as the words convey.

Comedian, actor and wrapper Doc Brown chose “The course of true love never did run smooth” from A Midsummer Night’s Dream, and The Brilliant Sign Company have turned the words into a Victorian gin palace sign, with brazen, loud lettering on a shiny background. A quote from the same play was picked by actor Ayesha Dharker, and is illustrated by digital collage artist Gareth Courage with four works focusing on eyes, trees and the moon. 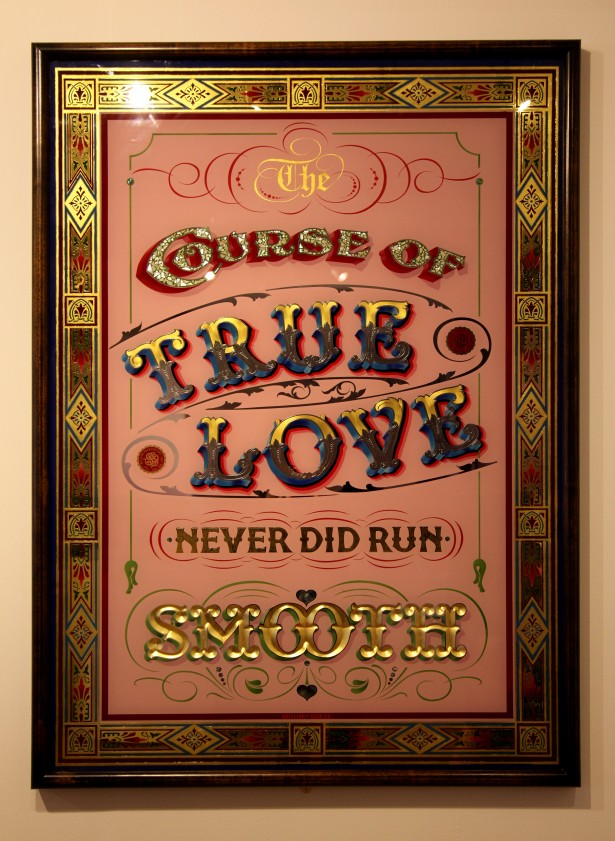 Somali performance poet, writer and theatre practitioner Yusra Warsama chose Sonnet 30, which has been interpreted in a film using British Sign Language by Deafintely Theatre Company showing a woman alone in a wood.

It’s interesting to see the quotes picked, and the reasons, and I was pleased to see what would have been my favourite, Caliban’s speech about the island and it’s “sweet sounds”, ending with his feeling that when he waked “I cried to dream again” Textile artist Karina Thompson has machine embroidered many of the words in gold and silver across four squares to bring out the glory of the words; the quote was picked by TV, film and theatre composer Isobel Waller-Bridge.

It’s an interesting exhibition of varying works, giving you a chance to decide for yourself how much you agree with the interpretations of the quotes or not.