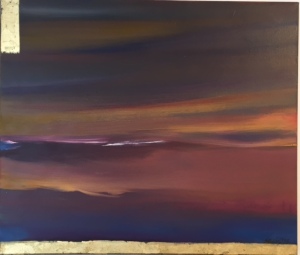 The Summer Exhibition at Deasil in Leamington brings together some artists from their stable of regulars whose works are shown in venues such as restaurants around the Midlands, plus some newer artists.

With pieces by about 14 people on show there is quite a variety of themes and styles of working. 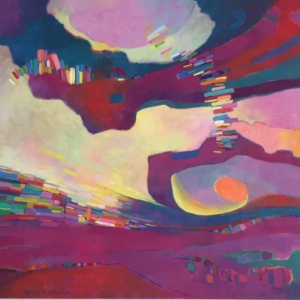 Coventry-based artist Nancy Upshall has three pieces here, including the oil painting Twisted Flax, a small work with a concentration on the turns in a material, and a larger work, Motley. 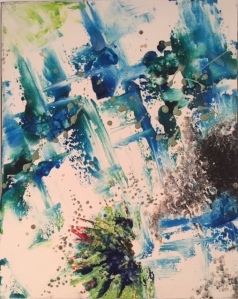 Susannah Rourke’s April Showers (above) are four paint and mixed media works of splashes of movement and colour, which can be rearranged into a different pattern if preferred, as can another set called Here I Am.

Chris Putt’s large digital print of St Ives is recognisably the resort, with colour added to the buildings. Stuart Ellis’s Sea Moon (top) has a gold base, with purples, oranges and golds going up into the sky, and is very effective. 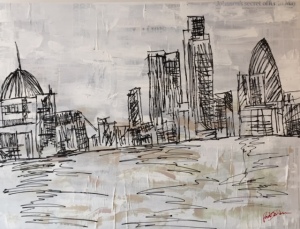 Paul Jordan’s City Limits (above) is a mixed media piece, with buildings drawn in black lines over a board on which newspaper has been stuck, and painted over white. You can tell it’s recently done from the headlines about Johnson and May visible underneath.

It’s another enjoyable and varied exhibition from the gallery which changes its exhibitions every three weeks.