Per Speculum, by Adrian Paci

An exhibition dedicated to the memory of an inspirational gallery curator and director who died too young brings together works by nearly 50 artists.

Michael Stanley was Director of Modern Art Oxford when he died in 2012, but had previously been a curator at Compton Verney Art Gallery in Warwickshire, and the Ikon in Birmingham and it is at the Ikon that the exhibition entitled The Aerodrome is being held.

The majority of the artists whose work is shown were personally connected with Stanley, in that he had worked with them or been responsible for exhibitions where their work was shown. There is though Study of Clouds by John Constable (1837) (below), an artist whose work he had wanted to exhibit.

The exhibition is co-curated by artists David Austen and George Shaw. George and Michael Stanley has known each other since George’s show at the Ikon in 2003, and they worked together when George curated an exhibition of Graham Sutherland works at Modern Art Oxford, An Unfinished World, back in 2011. (Review here)

In the bar at The Aerodrome opening, George explained: “Michael Stanley had given me a book, and then I mentioned the book to David Austin and then David read it much more closely than I did.”

The book was The Aerodrome, written by Rex Warner in 1941, and which had made a great impression on Michael Stanley. The Ikon describes it as “an allegorical novel whose young hero is faced with the disintegration of certainties about his loved ones and with a choice between the earthy, animalistic life of his home village and the pure, efficient, emotionally detached life of an airman. Its dystopian vision was very influential on writers such as Orwell, Burgess and Ballard.” 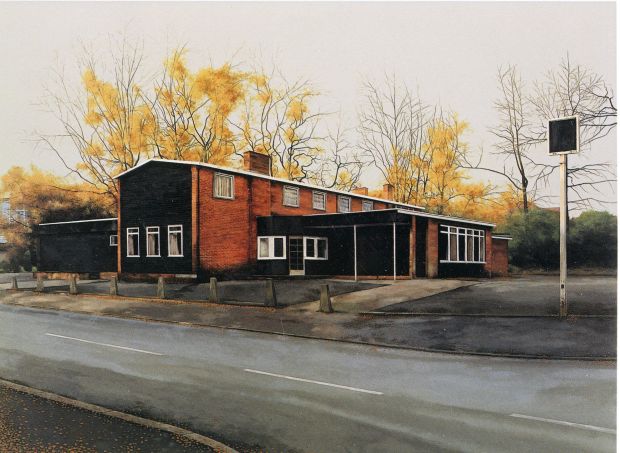 Scenes from the Passion; The New Red Starr, by George Shaw

David found links in it between how Michael created exhibitions, and with things they were all interested in including English modernism, the post-war period, works of writers such as Auden, and Catholicism. George said he liked the religious imagery, relationships, and the fact that it wasn’t class-based but looked at the country from different sides.

“The nearest thing to it is the comparison with Brexit now”, he said.

“I found the Englishness and the attitude to modernity really intriguing and it mirrors up with my own inability to deal with the contemporary.”

The idea of an exhibition came up a long time ago: “We were thinking back through the history of Michael’s career as a curator and not forcing it into an agenda, but once we’d started it fitted very neatly and naturally together. It was a way of looking at a lifetime of a person’s career through the prism of one particular book.”

The exhibition they have created spreads through three floors of the Ikon and the Tower Room and contains a lot of varied art.

One of the first works on the first floor is Chair Falling, a Super 8 film by Michael Stanley from 1995, presumably from his degree show.

There is a painting by George Shaw, Scenes from the Passion: The New Red Starr, a still-standing but lost looking pub. David Austen’s contribution is Fallen Man (above), an image of a man gone so far forward his head has disappeared. 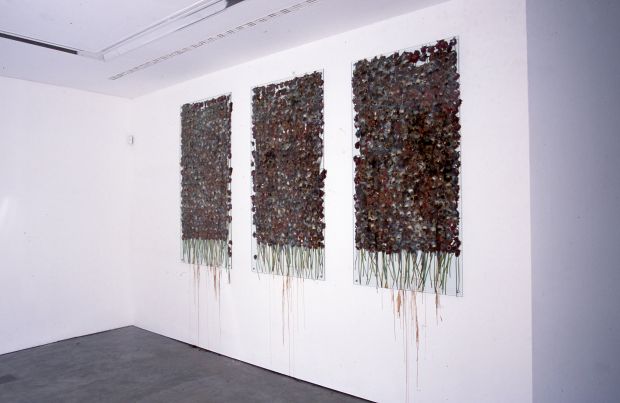 Anya Gallacio’s Preserve Beauty, 1991-2003, (above)  is an installation of beautiful but fading flowers behind glass.

There is a Graham Sutherland drawing of Cornstack in Landscape from 1945-6, to mark the exhibition George Shaw curated at Oxford.

A subtle and attractive Paul Nash drawing, Nostalgic Landscape, from 1925 (below) also features. 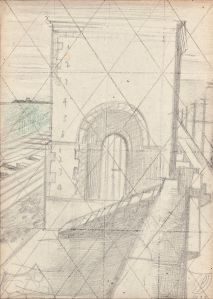 Adrian Paci’s Per Speculum, a six minute film, features scary youngsters, unnerving stares and a mix of reality and mirrors.

Jenny Saville held her first solo exhibition at Modern Art Oxford in 2012 (review) but is showing a work from this year, Portrait of Lola, a graphite drawing of a woman.

The Tower Room has been filled with a huge amount of salt, in an installation by Linder Sterling called Salt Shrine 2007/19. It was originally commissioned by Michael Stanley and created with 40 tons of salt to be placed in the RE classroom of his high school the week before the school was demolished. It apparently features the same crucifix as in the original installation.

I hope he would appreciate that touch, and the effort, commitment and thought that has gone into creating this exhibition which should draw more people in to appreciate the artists he valued.

The exhibition continues until September 8.

If you’re Christmas shopping in Birmingham and need something more stimulating to get you through the day, there are a few exhibitions which offer a bit of a respite. Well, they worked for me anyway.

At the Ikon gallery, Imran Qureshi’s exhibition is a mixture of his miniature paintings and site-specific installations made for the gallery.

Qureshi is known for using the disciplined miniature painting style of his native Pakistan in the Mughal courts of the sixteenth century and recreating it for the modern day. The miniatures look lovely, all delicate colours and shiny gold, but close up there’s more to see.

After watching on TV the aftermath of a terrorist attack on a marketplace in Lahore in 2010 Qureshi saw the blood-splattered surfaces, and felt a colour in his studio matched it. That red seeps into some of the miniatures, in splodges but also in delicate flower drawings or other patterns, overlaying the original image. In other miniatures, missiles are part of, and also not part of, what is drawn there.

There’s also red patterns across the floor, and on two huge gold ovals made from acrylic and gold leaf, called They Shimmer Still.

The image that has been most recreated from this exhibition in its favourable national reviews is the huge room full of thousands of sheets of crumpled paper. It’s called And They Still Seek The Traces of Blood, and is amazing in size and design.

The Birmingham Museum and Art Gallery as usual has several exhibitions on show. True to Life? New Photography from the Middle East is interesting and thought-provoking, especially in its works related to depictions of women and gender issues.

Static: Still Life Reconsidered is easy to overlook in the Waterhall gallery, and is quietly attractive, with lots of detailed and skilled works. There are also some larger more striking works by Patrick Caulfield, and for me William Nicholson’s work also stood out.

The West Midlands Open in the Gas Hall is large and varied in type of work and quality. Shaun Morris’s large and dramatic painting stood out for me. It was inspired by the land under the motorway around West Bromwich, and painted in the year of Margaret Thatcher’s death. The caption says Morris was struck by how the landscape around there had changed after she came to power, moving from manufacturing to distribution centres.

Also of interest were works by Bethany Kane. Originally from Rugby, she studied at City College Coventry, then the University of Derby. Her photographs are part of a Hidden Hunger project which looks at food poverty in the UK today. Foleshill Baptist church in Coventry and the Chace Hostel feature in this exhibition, both lacking people but with facilities provided to hopefully feed the needy. They are stark and lack warmth, but provide the sort of help no one ever wants to need.

Other paintings might be more cheery, but as a touch of reality in the run up to Christmas both Shaun Morris and Bethany Kane’s works spoke volumes.