There’s still time (just) to see the Masterji & Coventry exhibition which has received widespread coverage including TV and national press.

The project is funded by a number of organisations including Coventry City of Culture Trust and the city council, with support from Coventry University, City College Coventry and Fargo Village. It is on show at The Box at Fargo until November 20.

Maganbhai Patel came to Coventry in 1951 from Bombay, and as the story goes he was bored with his job and decided to photograph his very different new home city. By 1969 his photographs were proving so popular he was able to set up his own studio. Anyone who has driven up Stoney Stanton Road in the past decades must have noticed Masters photo studio on the right hand side over the canal bridge, driving out of the city.

Masterji as he became known, now aged 94, had his works included in the Imagine Hillfields Exhibition in the same venue in August 2015, but this is the first solo show of his work. There are some gems here; portraits of many people from the South Asian countries, posing with their families, their possessions and their new lives, including the photo below, which apparently shows a bus conductor who later moved to Canada.

The influence of Elvis Presley can be seen in some of the portraits from that era, with men displaying slicked back hair and quiffs. Later, weightlifters have bouffant hair and early gym wear as they lift weights to impress. In one photo a man lounges incongruously on a coffee table, with a book and some flowers, and in another a wild-eyed man stares out of shot, his moustache pulled into sharp points.

The decades pass and some people have their pictures taken in Masterji’s studio – some of which has been transplanted here for the exhibition – or crowded outside their own new homes. Perhaps they were anxious to reassure people back home they were ok, or show off their own properties.

There are also his own family photos. In one, a young boy takes a bath in the kitchen sink, and hopefully the Ajaz container nearby had been left there only by accident, and wasn’t in use.

It’s a fascinating exhibition put together by Coventry photographer Jason Tilley, Mark Cook and others who prefer to use the group name Photo Archive Miners. It’s just a shame the exhibition isn’t on for longer so more people could get to see it.

An exhibition which is part of a research project has drawn out some amazing never-seen-before photographs of the Hillfields area of Coventry, and added in some new pictures.

The Imagine Hillfields Exhibition is on at the Box in Fargo in Far Gosford Street, Coventry, until the end of the month. It is part of a project of the same name run by a team of sociology researchers from the University of Warwick which in turn is part of a national project looking at the way society imagines its present and future.

There are work by five photographers on show, all showing post-war Hillfields. John Blakemore (one photo top), born in 1936, had wanted to be a social documentary photographer, and his photos from the early 1960s have never been seen before. They are quite astonishing, some looking much older than they are, especially a chimney sweep and his wife in their home with the wallpaper hanging off damp walls.

In many labelled Urban Playground, children play amongst rubble and a terraced street stops dramatically with a gap where a house once stood. In Eric Green’s Triangle lots of terraced houses disappear into the grey background and in another a cheery shopkeeper, cigarette in hand, smiles for the camera. There is a young child in a mosque, and a Sikh family walking down Primrose Hill Street, reminding us Coventry has been welcoming new people for a long time. 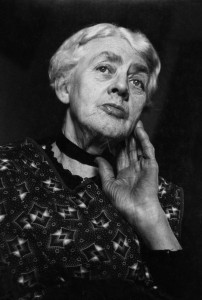 Richard Sadler, now 87, used to photograph celebrities visiting Coventry, but his pictures on show here document a day in the life of his grandmother, Minnie Sadler (one image above), who lived in Hillfields. She’s seen sitting on the edge of the bed in her tiny attic room, all tussle haired, then looking much smarter when done up. She’s seen washing the doorstep, like a good 1950s woman, going shopping, pictured artily from behind a street display of prams, and having tea. There’s also a little boy dressed as a sailor at the Coronation celebration.

Masterji, now 91, came to England from Mumbai in 1951 and became the owner of Master’s photographic studio in Stoney Stanton Road. His images are all portraits of South East Asian families through the decades, and so document changing fashions and styles. There’s strict moustaches on men in 1965, and a more laid –back cool look in 1975. A Sikh family pose in their own home, husband and wife either side of the big TV also in 1975, and Indian weightlifters with long hair show off their muscles at Sidney Stringer School. They are all very atmospheric (one image right).

Jason Tilley, former Coventry Telegraph photographer, has created new works in response to the Blakemore ones, showing in vivid colour portraits of the varied population of Hillfelds today, often looking away from the camera in the street, or proudly outside their own homes, showing the continuing changing make up of the population (image left).

In the entrance area, Nick Stone’s photographs use ghosting to merge old pictures, including a horse-drawn drinks cart, with photos of the area now to show change and continuity in one.

It’s a fascinating exhibition and essential viewing to those keen on photography, social history and Coventry.