A small exhibition tucked away in the centre of Coventry celebrates city life in several different facets.

The exhibition, on the first floor of the Belgrade Theatre, is the work of 11 keen photographers, who each show three images under the title of City Life. They were challenged with interpreting that title to capture their city’s people, nightlife and environment, though some have chosen Birmingham or London instead of Coventry. It’s interesting to see the similarities and differences between the pictures. 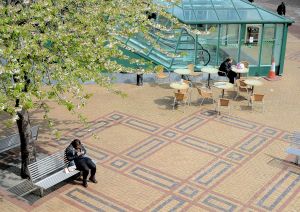 Jim Harris pictured the large Primark building against a bright blue sky with the brutalist architecture and large open spaces in front giving it the stark appearance of an eastern European city in the communist era. Another shot looks down as two women sit separately near the escalator in the Upper Precinct, both alone with their thoughts or their phone. Jim said he was fascinated by the triangulation in the paving and an incongruous traffic cone (both works above).

Kim Slater’s images are attractive black and white ones of people walking on the cobbles of Hay Lane. In one, an old man looks at the ground, and in another a man looks down at his feet as if he’s stumbled, and another shot captures a walker at a lower level. She said it was only now they are on show together, she sees as well as the area which she likes, they all involve a concentration on people’s feet.

Tony Skipper has captured a colourful vegetable stall on the market, a street performer framed between passing pedestrians, and a cheeky monotone image of a young man, baseball cap pulled down as he poses with his skateboard next to a ‘no skateboarding’ sign (above and below). 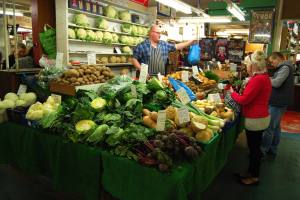 Rebekah Mason’s three images show dramatic graffiti art at the Custard Factory in Birmingham (one of them, left), and Maria Ahmad’s London photos include some pretty flowers, in front of a sleeping homeless man. Angela Haworth also concentrated on a London train station, taxis in a row and bicycles also lined up, while Craig Simpson’s three images show increasingly blurred images of buses going by, one cleverly capturing the bus framed between flashing beacons on opposite sides of the road.

Kelly Upton concentrated on the Flying Standard pub and the surrounding area in Coventry city centre, Caroline O’Hagan on grand buildings in Coventry and further away, Tommy Byatt on people and the area around the cathedral, and Magdalena Tomczyk has photographed night scenes of Coventry, which with the blurring lights make it more exciting than the reality.

All the photographers are evening class City and Guild Level 2 Photography & Photo Imaging students at City College, showing the high standard of work produced by the students taught in Simon Derry’s class. The exhibition is free, and on until June 20.