If you didn’t get enough of the Olympics …. There’s a chance to see it from a different angle in a new art exhibition.

Deasil gallery in Oxford Street, Leamington, is showing Motion and Emotion, an exhibition of Andy Farr’s paintings, until September 8. Andy is keen on capturing movement on canvas, and the show includes a number of works inspired by the recent Rio Olympics, as well as other works.

Andy said he works partly from photographs, but largely from film, watching and re-watching sportspeople in action to come up with his paintings. Many feature expressions of movement, such as Andy Murray’s swinging arm in a tennis shot, or a cyclist whizzing through the frame. Others are like a video that has been moved on frame by frame, showing a sequence of slow motion movements. 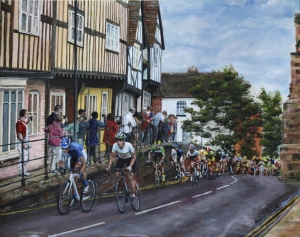 Pursuit has a single cyclist against a colourful background so you can concentrate on the movement, and Pedal Power has a cyclist in slow motion. Some sailing paintings are slightly different, with a concentration on the different blues and aquamarine colours of the water. Carnival is a painting Andy was unsure about – a celebration of the bright colours of dancing girls in a Rio carnival, a riot of colour as well as movement.

There is also a detailed paintings of a women’s cycle race which came through Warwick earlier this year – for that Andy was there on the street with his camera to capture the riders coming through, and also the spectators lined up opposite with their cameras.

He has previously done a series of works related to dance, saying he wanted to “get a sense of the dance in the painting”. Paso Doble from that series is in this show, a lovely swirl of red dress, embrace and movement.

Andy lives in Leamington, and turned from a career in brand building and marketing to painting a few years ago, and is now studying for an MA at Coventry University’s School of Art and Design, with his degree show coming up shortly. He said some of the sporting works in this exhibition came as light relief compared to paintings of a World War I theme he has done for his MA.

It’s an interesting exhibition and study of sporting superstars showing off their talent.