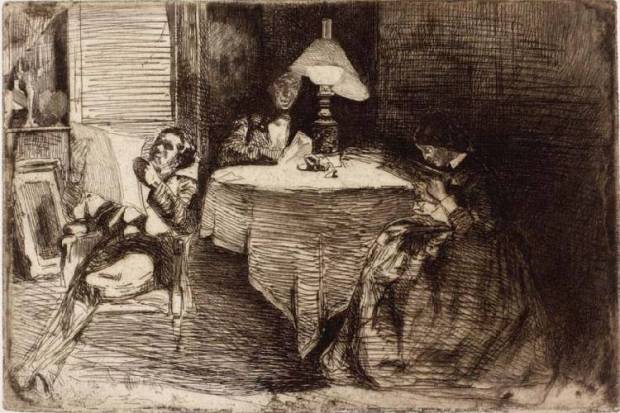 The Music Room, 1859, JAM Whistler @ The Hunterian, University of Glasgow

Art where the greatness is in the detail is the focus of the new exhibition at Compton Verney Art Gallery in Warwickshire.

Entitled Whistler and Nature it looks closely at the work of James McNeill Whistler, the American-born but generally European-based artist who was active in the latter half of the nineteenth century.

However after looking round a lot of the exhibition it does raise the question of how closely the title relates to what is on show. In the catalogue introduction Compton Verney Chief Executive Steven Parissien says that Whistler’s “close observation of nature and its moods underpinned his powerful and haunting visions of nineteenth century life”. And there are many seaside scenes, but also the Thames River in built-up London, indoor paintings and parts that focus on people and nudes in particular, and it’s hard to relate the title that well back to the exhibition.

The show starts by telling us about Whistler’s background in a family of soldiers and engineers, and how he went to the military West Point Academy in 1851-54, and learned to draw maps. There are some examples of his topographical works on show.

In 1855 he moved to Europe, and lived in England amongst relatives including a half-sister. There are some charming early etchings from London, including the 1859 The Music Room, showing the family sat around reading or knitting, a collection of lines bringing them to life. A Greenwich Pensioner lounges on the grass in a top hat in another etching, and the grass is patterned in swirls in Greenwich Park from the same year.

A room is dedicated to etchings of the Thames, focusing we’re told on line and topographical accuracy. There are fantastic historically-interesting views of water, warehouses, and boats with tall masts. In Black Lion Wharf workers are rowing boats around, or sitting after some task. We are even shown how this particular image is on view in the background of the famous painting of Whistler’s mother on show at the Musée D’Orsay in Paris.

The influence of Hiroshige is very apparent on Whistler, as on many international artists at the time, and there are a few of the Japanese artist’s works on show to make this clear. There is even a small, beautiful painting by Whistler of women looking over the smog-covered Thames with dresses and parasols which look like those of Japanese women.

In 1879 Whistler fled the fall out of a court case to go to Venice, and one room is dedicated to a small number of these works, and they are again detailed and charming, showing typical scenes but with his own style; one is unusually an upright view of a favourite view, and there is The Traghetto no2, people having a drink with a gondola only just visible in the background. One etching is highly detailed and floral, another is very pared back and powerful.

The Traghetto, No2, JAM Whistler @ The Hunterian, University of Glasgow

There are two sections which don’t seem to fit in with the rest of the show. In Whistler in the Studio, we are invited to admire his draped figures, influenced by classical Greek designs and also Japanese art again, rejecting the earlier Courbet-inspired outside paintings and etchings. A later sections returns to draped figures and nudes, where he has obviously decided less is more, and drawn a veil over the details of his female models’ bodies. It is in the former of these sections that the largest painting in the exhibition is on show, a lovely painting of a woman striding along, her scarf billowing, painted in the styles that Whistler was practising, but by his friend Albert Moore. It’s a brave decision to include it as it overshadows some of the works nearby.

Whistler’s Travels takes us away to the 1880s-90s, and trips to France and the English coast, including St Ives, and lots of small watercolours and oils which are very successful. A few areas of colour or a few small lines portray ships, people and the landscape. In Grey and Silver – North Sea ships battle on beneath the grey sky, and the Bathing Posts, Brittany, show the sea where people were beginning to enjoy bathing.

Some lithographs of Paris are excellent, just a few lines bringing to life people in the Luxembourg Gardens, his wife gardening or people visiting.

Whistler returns, as his wife lay dying, to depicting the Thames from the window of their room, showing people going about daily life beside the river, or crossing bridges, as his viewpoint remained little changed.

It’s overall a fascinating exhibition and a glimpse into the skilled smaller works of a painter better known for his larger, impressive paintings.
*The exhibition is on until December 16.