It’s New Art West Midlands time again, when there’s a chance to see winning work selected by a judging panel from applicants who have all graduated in the past three years from the region’s art schools.

This year the work is on show at Birmingham Museum & Art Gallery (until May 13), AirSpace Gallery, Stoke-on-Trent (until March 31), and at The Herbert Art Gallery and Museum in Coventry, which is so far the only space I have visited.

Unfortunately there’s no work on show there by Coventry University graduates, but there is work by 10 artists out of the 28 from 130 who applied this year. 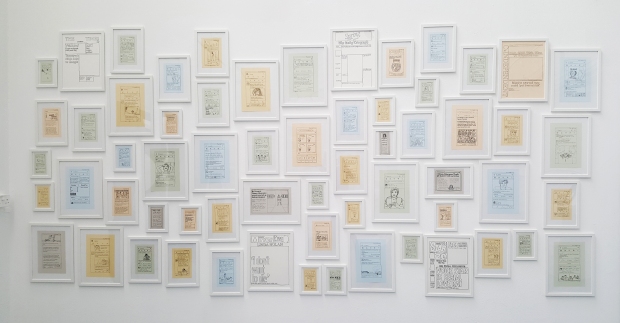 They include works which of course reflect themes and changes of our times. Kerri Jayne’s work (above) called One Day features 148 framed pieces of work highlighting the overwhelming number of news items that can come at you on one day online from traditional and social media. There’s ‘real’ news, as well as fake, celebrity and life advice. They are presented in a variety of ways and highlight the claustrophobic effect this can have.

Lucy Hanrahan’s work We Are The Social Media Generation also looks at the influence of social media, with a few words displayed on a big blue background-type screen, and a ubiquitous phone screen, with one eye reflected back at you. More of her work is on show at the other two venues. 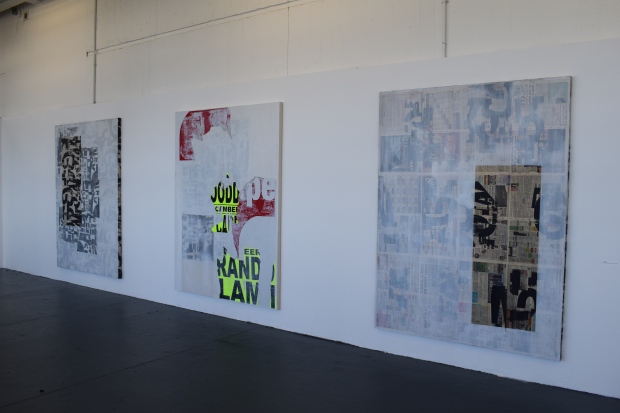 Lisa Kemp’s Ephemera 1, 2 and 3 (above) also looks at the bombardment of information which comes at us every day through many sources including billboards and advertising. Different sources are used to create three large boards of overlapping information, including one where the background is entirely the Wolverhampton Express and Star.

Gem Douglas’s But How Is The Mouth of the Shark (top) also looks at a big contemporary concern, creating what could be an abode of a homeless person, hung with scraps of material, but also includes poetry by Somali poet Warsan Shire who has written of the plight of refugees. 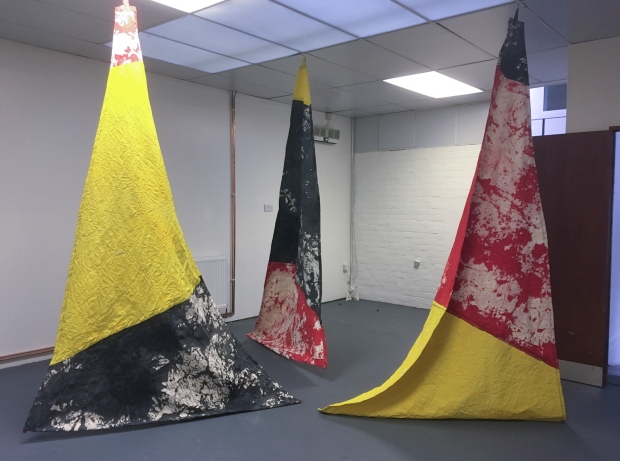 Maggie Shutter has used canvas in different ways to challenge the use of materials in art (above), creating Square, a piece of what looks like fabric not quite falling in a square shape, and Three Sails, brightly coloured works filling a corner.

Valerija Zukova’s work is hard to look at clearly, being a work in Perspex, held together with small clips, and able to be formed into different shapes. She is questioning the variety of different types of sculpture and use of materials.

Another couple of artists are featured in a corridor, and they include Jez Dolan, exploring queerness and language, with altered wording used in reports by John Wolfenden, who chaired the 1957 committee which recommended the decriminalisation of homosexuality.

The exhibition demonstrates some common themes, but also the variety of work being produced in the West Midlands art colleges. The show at The Herbert is on until May 13.