The definitive guide to the buildings of Coventry and Warwickshire has been revised after 50 years – and was launched at a venue chosen with some significance by the revising author.

The Buildings of England Warwickshire, by Chris Pickford and Nikolaus Pevsner was launched at the Governor’s House at the Chamberlaine Almshouses in Bedworth.

Mr Pickford, formerly Bedfordshire archivist, who has spent six years revising the 1966 original by Pevsner, said he had considered many grand houses for the launch before deciding on the almshouses just off Bedworth’s pedestrianised precinct (above).

He said: “Some of you who knew the old book will understand why. Pevsner called Bedworth a ‘depressing small town’ and dismissed its buildings in 16 small lines. He gave two lines to these wonderful Almshouses.”

He said many more buildings had been included in this revision and he aimed to right wrongs where necessary – Bedworth now has three and a half pages, including an engraving of the Chamberlaine Almshouses from 1839, and a suggested perambulation around the town to take in the sights.

Mr Pickford said Warwickshire had many places such as Warwick and Stratford to attract tourists, but he added: “One of the other reasons we have come to Bedworth is the north is less well known than the south. This is a county of immense richness and what we are saying is don’t ignore the north.”

He grew up in Warwickshire, and said he first explored the county’s buildings with the original Pevsner volume as his guide. A sixth form work experience at Warwickshire’s county record office set him off on a career in the archives.

Speaking at the launch, Charles O’Brien from Yale University Press (below right with author) said Chris Pickford had helped him with the Bedfordshire revision, which led to him being asked to revise Warwickshire. He said: “We were keen that we confound people’s expectations by finding buildings people knew nothing about and we think we have fulfilled that aim amply this evening.” 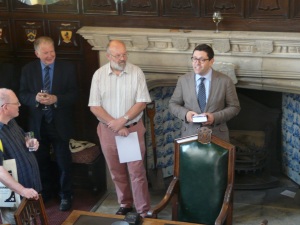 The 801-page book explores the county and Coventry in depth, commenting on the history and architecture of buildings. It covers churches, public buildings, plus other structures such as folly towers, toll houses, railway viaducts, mansions and other houses. There are walks around towns included so readers can use it to explore places.

Artworks and memorials inside buildings are also described and commented on, with an index of architects and artists so you can locate work by those you are interested in. The new version is also two and a half times the size of the first, so is a thorough guide to the buildings of the county. Information from the original Pevsner remains and is expanded on where Chris has more to say, though of course many buildings have been or gone since the original. Some of Pevsner’s more waspish comments have been questioned and challenged.

At the launch, Pickford added: “I have been revisiting many places from my youth. I was treading in my own footsteps as well as Pevsner’s and it was great fun meeting people who’d met him on his first visit. They said ‘he was a very rude man’!”

Someone he met at a remote farmhouse told how they had let Pevsner in, then wondered if they should have done, it being just a few days since the Great Train Robbery.

He said he hoped he had brought to the new book 50 years’ knowledge of the county and its buildings, and he in particular wanted to include more information on local architects and their buildings. Having road tested the new volume at various places in the county, it’s certainly true that it now answers many questions about who was the architect or firm behind various buildings.

There are also of course many new buildings included; in Pevsner’s day Coventry University as such did not exist, and there are references to Lanchester College of Technology and the College of Art, but in the new volume it has three pages to itself. Similarly, the University of Warwick had less than a page referring to the plans, but now it also has nearly three pages. Many other new buildings are also of course included for the first time.

• The Buildings of England, Warwickshire, by Chris Pickford and Nikolaus Pevsner is published by Yale University Press at £35. 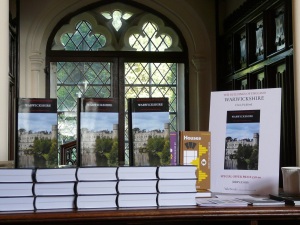