An exhibition opening tonight began a week-long event celebrating the culture of a community now established in Coventry.

Coventry University Romani Week continues until Friday, May 1 and through it, in the words of one of the organisers, senior lecturer Marcos Young: “Our University confronts the last bastion of acceptable racism, promoting positive images about Gypsies.”

The exhibition opening was celebrated with food made by the local Romani community, including a huge chunk of one of the tastiest, if stickiest, cakes I’ve ever eaten. It was lucky no politician tried to eat it in front of a camera.

The works on show are photographs by Antony Weir, taken at a specially-organised Romani Family Picture Day, curated by Rosamaria K Cisneros and taken in collaboration with the Coventry Roma Project Families. The exhibition is called Family Matters, or Chestiuni de familie.

All posed against the same dark background they show couples hugging, families posing starchly or casually, a mum or child falling about with laughter, little girls in pink pretty dresses and little boys unsure whether to smile or cry. They show a community happy to be photographed together, demonstrating their close ties, and many of those in the pictures were at the exhibition opening.

Deputy council leader Phil Townshend, cabinet member (policing and equalities), officially declared the exhibition open, and said he did not play lip service to the idea of community cohesion, but tried to make things happen.

He said he had recently made a presentation to the Romanian ambassador and 60 members of the government, and hoped soon to welcome the ambassador to Coventry for a third time, this time for a forum with members of the engineering industry and representatives of other eastern European EU states.

He said: “There are more things that unite us than divide us and we must not let people divide us because there’s no need for it, that’s not how life’s meant to be, and it is about recognising the contributions of the people who come to Coventry and make their home here.”

The photographic display is on in the Coventry University Alan Berry Atrium Gallery, opposite Coventry Cathedral steps.

Other events this week include films, talks, a performance installation and conversation series, including Ramón Flores, from the Council of Europe’s Forum of European Roma Young People Program, making a special visit from Seville to talk about his work with the European Commission, and an evening of entertainment in Opre Roma in the Lanchester Gallery at 7.15pm on Thursday.

There are more details below and on the Facebook page Romani Week Coventry University. 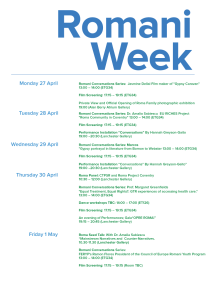