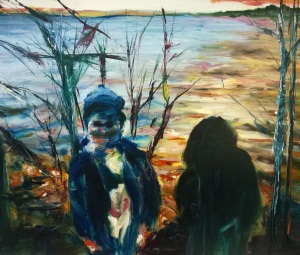 New Art West Midlands is in its third year and getting your work into it is a prestigious draw for recent art graduates – last year 100,000 people are said to have visited the exhibition across three galleries.

This year there are four involved – the Herbert in Coventry, Birmingham Museum & Art Gallery, Wolverhampton Art Gallery and the Barber Institute of Fine Art, showing the work of 30 people in total. All have graduates in fine art from one of the West Midlands art schools in the past three years, with successful works chosen by artists John Newling and Bedwyr Williams, and art historian Amna Malik.

There are four Coventry University graduates showing in the exhibition, and I spoke to them at the opening in Birmingham.

BA in Fine Art graduate Jennifer Shufflebotham’s work (top) had already been recognised before she was also selected for New Art West Midlands. She was offered a residency at the Pod in Coventry after her degree show last summer.

At the Birmingham gallery she I showing two paintings inspired by a box of slides she found in her grandparents’ attic in Burton on Trent about four years ago, showing family holidays in the 1960s, when photography was more of an effort than today when people can take pictures by taking their phone out.

She said: “I’d never come across them before and I was really interested in the balance of analogue photography and the easy access to photography and Instagram that we have today.”

She has re-layered them to create paintings, with blurred and slightly strange images produced. Foremark Reservoir II is particularly interesting, with one person reduced to a dark shape which could be deliberately cloaked.

Michael Carr’s work includes Instructions Not Included, a screen print of the instructions for looking after a vinyl disc, and A Message To You Rudy (above), a digital ink work showing Lynval Golding from the Specials depicted on a street map of Coventry. If you pick up the exhibition leaflet you get your own copy of this.

Michael came into the world at the Walsgrave Hospital in Coventry and said music of the Specials had been “a big influence on my life”, and puts the work in the context of “a vision of psycho-geography and how music can motivate and change lives and people”.

He started this work with an illustration of Lady Godiva on a map: “The Specials and Lady Godiva testify to the strength of the city. A lot of people speak badly about Coventry but if you look at the invention of cars, sewing machines, watches and all its industry there’s a lot of strength there.”

Michael has just finished an MA in Contemporary Art Practice but his undergraduate degree was in graphic design, and he hopes to get a studio and have some links to the university still. I’d already seen his work at a couple of exhibitions in Coventry, showing he’s getting out there already, and with his energy and enthusiasm he’s sure to go places.

Reece Kennedy’s work was inspired by talking to his Coventry University tutors about art education, studying, and the student’s audience. He chose to capture the paradigm of the art fair by creating an installation of a room from the Frieze art show entitled Greatness Engine Future Prospectus (above). Reece graduated with a BA in Fine Art and is running his own printing business in Birmingham. 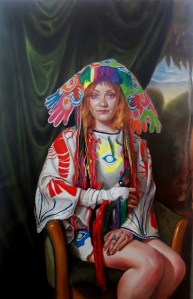 Other works on show at Birmingham Art Gallery & Museum included Emily Sparkes’s self-portrait in a colourful costume, Ode to Christian Joy (above), and she also has some paintings on show at the Herbert of Pearly Queens, relating to cross dressing and gender roles. They are interesting and keep the attention. James Turner’s reworking of paintings from the gallery’s collection sees beams of light coming from the painted women’s eyes, distorting how they are viewed and turning them into light box works.

At the Herbert in Coventry, Andrea Hannon is showing her installation works. Housekeeper is a lightshade with things hanging from it, and Territory Formula features flowered wallpaper and cut outs of women from magazines. Puppeteer includes more cut outs, an old framed mirror, and little character cut-outs, including a Victorian woman.

Coventry born and bred, Andrea has recently completed a Fine Art PhD at Coventry University. She used to do large paintings, but has now moved into multi-media installation and collage works.

She said: “It was during the masters I became interesting in structures of knowledge and how we become defined as one thing or another.”

She uses a lot of magazine and encyclopaedia images, and this set of work is based on the idea of what it means to be the ideal woman, as seen through the media, being good at cooking and housekeeping. Andrea has now moved to live near Stratford, and is teaching at the college there and working with some other former Coventry University students.

Also at the Herbert are varied works including Megan Sheridan’s documentary-style photographs depicting British people on a traditional seaside holiday (above), or having lunch on the grass in Birmingham’s St Philip’s Square. There’s also an intriguing video from Jade Blackstock entitled In, In, In (below), in which she wears white and paints her skin white and is then sprayed with white liquid foam, an unpleasant claustrophobic experience which aims to turn ‘white’ from an adjective to an actual object. 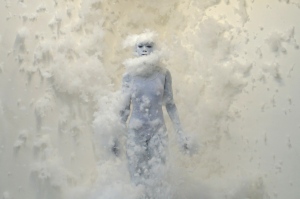 I’ve visited two of the galleries and at first sight haven’t been as impressed overall with the selection as last year. Maybe that’s because there’s nothing as stand-out impressive as Lucy Hutchinson’s masks and wallpaper, James Birkin’s paintings, or the transformative sculptures of Sikander Pervez, who is currently exhibiting at the New Art Gallery, Walsall, after being selected for a solo show.

But only time will tell whose work from the 2015 exhibition we will be seeing more of on a larger stage.

*New Art West Midlands is on at Wolverhampton until April 26, both the Birmingham galleries until May 17 and the Herbert until May 31.