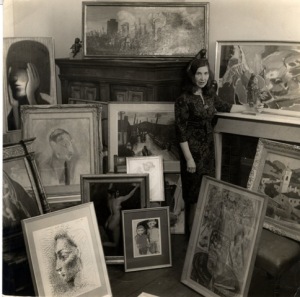 Lady Kathleen Epstein with some of her art collection C.1972
(Image ref: GarmanRyanCollection)

It is 40 years since the Garman Ryan collection was created and given to the people of Walsall, and put on show for everyone from further afield to enjoy.
The permanent exhibition at The New Art Gallery in Walsall has been supplemented with lots of archival material for the anniversary exhibition, entitled Dealing with Dreams, which tells more about the history of its creation by two generous and insightful women. There’s also a room dedicated to works left by another woman who is part of their complicated story.
The story of the Garman Ryan collection is one of generosity and loss.

Kathleen Ryan was born in Wednesbury and in the 1920s controversially had three children with sculptor Jacob Epstein though they only married in 1955, some time after the death of his first wife, and after the tragic deaths of two of their three children.
After Epstein died in 1959, she hoped initially to open a museum at his studio. Information in this exhibition, though, explains she soon realised this was unfeasible.
Instead she created an art collection of fantastically big-name works with her friend Sally Ryan, a sculptor and daughter of an American tycoon, continuing to build it after Sally became terminally ill with cancer. When Sally died in 1968, Kathleen started to look for a lasting home for what she came to call, interestingly given that she had married, the Garman Ryan Collection.
Talks and negotiations followed, and the exhibition finally opened on 9 July 1974 above the town library. Forty years on, this event was celebrated in The New Art Gallery in Walsall where it is now more spaciously and proudly housed.
This exhibition, on show until 16 November, includes displays of more archival materials, including photographs and letters which show the detailed work needed before the exhibition could go to Walsall.
Interestingly, it was believed at the time that Walsall was going to get a new art gallery which was one of the reasons Kathleen wanted to leave it to the town – though it took until 2000 until this came true. The funding to build the gallery was largely attracted by the strong collection it would centre on, and the tall building beside the canal basin has of course transformed the town’s landscape as well as cultural life.

Vincent van Gogh, (1853-1890), Sorrow, 1882, The Garman Ryan Collection,
The New Art Gallery Walsall
The collection includes works by some world-famous names; there’s Sorrow, a drawing by Van Gogh, and works by Augustus John, Degas, Renoir, Turner and Cezanne amongst many others. Amongst them nestle works by Jacop Epstein and his and Kathleen’s son Theo Garman who died in 1955.
The portrait Kitty by Lucian Freud shows their surviving daughter, who was Freud’s wife.
This exhibition also asks and answers some intriguing questions, such as why the collection received only one of the two Van Goghs Kathleen owned. L’Allee en Automne, a wonderful painting from 1885, has been borrowed for this exhibition so the very different works can be seen together. Kathleen wanted the painting to be sold after her death, with the income going to her granddaughter, Annabel Freud.
A mystery not solved is what happened to a Samuel Palmer painting which should have been part of the collection – two were apparently sent but letters show only one arriving, and a search being promised for it.
Another fascinating room in the exhibition includes works left after the death of Beth Lipkin, who lived with Kathleen Garman for more than 30 years, and who was a major beneficiary in her will. Beth ran a gallery for Kathleen, and some of the works on show here which were gallery stock are still unidentified.
As well as viewing the fantastic Garman Ryan Collection, there is a lot of reading to be done here and it tells wonderful stories.
In 1973 Kathleen Garman wrote prophetically “I feel we are dealing with dreams and about to house them in a solid Midlands setting for posterity. How delightful.”
How right she was.