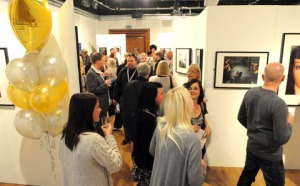 You’ve only got tomorrow (Saturday June 16) left to see it, but artworks by Coventry’s Henley College students are on show at The Herbert in the city centre, and worth a visit.
Around 60 varied pieces by students from the media, photography and creative arts courses are on show upstairs in the studio. It’s the second year the college has had its annual final show in the Herbert, and it’s just a shame it’s not on a big longer to let more people see it.
They include an area where visitors can have a go on a new Playstation game created and designed by the Games Development students.
I’m more comfortable with the traditional art forms, but there’s still plenty of variety.

Debbie Tester, who was outstanding student of the year on the second year of the photography level three course, has shown a mystical looking picture of a dancer in motion.
Chloe Etheridge is interested in recycling and has taken an old table and re-branded it to fit this summer’s many patriotic events with a Union Jack, plus used some old material to make a big flag on the wall.
Hannah Sutton has photographed an unusual meal featuring noodles and fruit, and Farzana Bee has created an unusual self portrait from a college pass copied many times and put back together again.
Thorin Maguire and Kirsten Sykes took part in a project inspired by the George Shaw exhibition, looking at a place they belong. Thorin’s painting is large and confident, featuring a car disappearing down the street into the intense blueness, and is also influenced by Turner, as is well demonstrated in the writing to go with it. Kirsten’s work is detailed and shows a town scene with the buildings defined by paint piped on to it. Both work really well.
A very professional-looking exhibition demonstrating lots of promise from these young students.