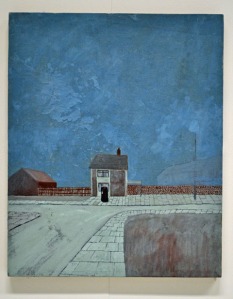 IN The Herbert gallery in Coventry the paintings are on the wall, and the final preparations are being made for George Shaw: I woz ere to open to the public.
It’s the first big home-town exhibition for George, born in the city in 1966, and he’s here overseeing the work and admitting to feeling a little anxious about how it will be received.
“It’s all right doing this, thinking about it before I came to do it wasn’t. Without Rosie’s [Addenbrooke, senior exhibitions and events officer] enthusiasm and commitment it wouldn’t have happened. It was something I was avoiding. You are always afraid of doing something you haven’t done before.
“I was slightly anxious the reality of the situation would take over from the work. In many ways it has but not in a negative sense.”

He looks towards one of the paintings (below), of a house behind a hedge. “It becomes not an old house, but someone lives there. The person might come in and ask ‘who’s painted my house’.”

All the paintings are of the Tile Hill area of Coventry where George grew up and lived until he moved away to do a BA in Fine Art at Sheffield Polytechnic in 1986. That means the subjects of the work are the reality of a post-war estate – bus stops, flats, pubs, social clubs, derelict garages, all devoid of people and painted mostly in flat, muted palettes. There’s one bus stop painting with a hint of sun, and he jokes he doesn’t know how that one’s crept in.
He says: “I have been asked about the role of Coventry in the works and it’s not something I am that interested in. I was asked why haven’t you done the cathedral but my memories of growing up weren’t in the city centre, it was where you went to do the shopping.”
He says if you think of Coventry as being a medieval city, or about the wartime bombing, that’s not part of the contemporary life he’s interested in. If he talks to Coventry friends his age about the city they knew, or music like the Specials, he said “my nephew who’s 15 can’t give a monkeys about it”.
The paintings have a lonely quality, and George says he’s been asked if they’re about memory, but he says: “It’s more about confronting loss, memory is something you retain. When you go back home after a period of absence the first thing you notice is where’s that bus stop gone and they have moved it down the road.”
The local pub being gone is a particular loss he feels. “It’s a national scourge, the removal of pubs from the British landscape, and what it says about working class culture I have no idea. Tile Hill has one pub and it used to have about five.”
George has a fondness for Coventry pubs still, though memories of his youth here are mixed, including huge racial tensions and people getting stabbed – and when he went into the city centre a few years back after a long time way he was shocked to find the Oak in Gosford Street completely transformed from his days at Coventry Polytechnic doing a Foundation course, when it used to be full of art students. He used to frequent the Dog and Trumpet, Hope and Anchor, Rose and Crown and the old Browns – places “where all the misfits who didn’t get into Park Lane could go”.
There are paintings of pubs and social clubs, including one now sadly demolished, with the site left empty. “Were it somewhere else it would be a development opportunity but it has remained a bomb site much to the disgruntlement of lots of residents,” he notes.
Walking round the exhibition with George, it’s obvious that although many of the paintings were done a few years back his memories associated with the sites are just as fresh. There’s one of Our Lady of the Assumption, his primary school, showing a small white shrine on the dark brick wall: “It’s a shrine to Mary’s husband Joseph, the cuckold of the story. He’s got a hammer and had a similarity to Peter Sutcliffe [mass murderer, the Yorkshire ripper]. I remember the older boys, or maybe the teachers, smoking there.
“The garages were a threatening presence and when you became an adolescent you became extremely attracted to that darkness, and there were older adolescents with fags, booze, and porn mags and illicit sex.”
There are also places that have gone, such as the old library, hard to see in a very dark scene: “It’s a new facility now, not mine, I walk past it and don’t see it in a James Bolam, Likely Lads way.”
George points out a tree that appears in one painting which is also in another from a different angle, showing different buildings, and I suggest you could draw a map of the estate from his paintings. He says: “It’s almost like a map in the mind, but what happens is the map is subjective and personal to me. It wouldn’t describe it to someone else who grew up there.”

There are also some new works on show, watercolours of some of the same places which have now moved on since the paintings. An empty site has fencing round it, the derelict garages have been cleared to create quite a green scene and the pub scene is poignant – a path leading nowhere with an empty pub sign standing amid a space being taken over by undergrowth (above). He says ironically: “Archaeologists in the future will probably say it’s where primitive people used to meet and worship.”
The watercolours were painted from photographs he took of the sites now: “Watercolour is usually a very British/ English medium that’s been used to represent a very pastoral vision of the countryside but I’ve used it here to depict a very non pastoral view of English life and I like that contradiction in a way.”
The third part of this exhibition is a room full of George’s works pre-art school. He says: “I call these the ‘gazunder years’ because most of it was under the bed. My dad died five years ago and it was under his and mums bed. You do an inevitable postponing of the clearing out and when we did we found a lot of these.”
There’s a painting of a scary house which was broken in half, but his proud dad had still kept, plus a large collection of life drawings – George says he always wanted to be an artist, and knew it was important to learn, and he got addicted to it. Of course life drawing wasn’t done at his Catholic school so he spent all his money getting himself to classes above the Co-op in town, and the University of Warwick. 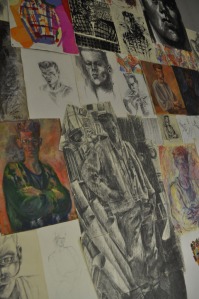 There are also many “self-mythologising” self portraits (above) with hairstyles ranging from Ian McCulloch from Echo and the Bunnymen through the Cure, and Theatre of Hate to Morrissey, plus many portraits of his parents, sisters and brother, and their home and surrounds. In one his brother sleeps in his bunk bed, while the foreground is fittingly filled with George’s paints on the table.
At 15, his art teacher from Bishop Ullathorne School took him to Coventry Polytechnic, where he met art artist and teacher John Yeadon, who became a lifelong friend despite the young George telling him “I want to be you”. They are holding what is being billed The Last Tutorial at The Herbert on Thursday, February 9, where they will discuss the exhibition and the Turner Prize.
George said he got involved with the Turner because it’s a way of stimulating debate, taking art to media that doesn’t always cover it, and because it increases his audience. He will find out on December 5 if he has won or not, but even if not it will take him to new levels in the art world – Tracey Emin didn’t win and just gets more and more famous.
But what next for his art? George says his painting grew out of being a bad filmmaker and photographer but he still takes photographs, and writes, and would like at some point for his drawings to be seen: “From my point of view one of the things I enjoy most of all is drawing but they take too long and are too laborious, and people who curate exhibitions step over them to get to the paintings.”
Do drawings take longer than paintings? “The way I draw, yes.”
But art fans can be pleased it doesn’t look like the Tile Hill paintings are done with: “Sometimes when I am in the studio I think have I got anything else to contribute and I come here and go for a walk with my mum and I come back with a thousand photographs and notes.”
*See Friday’s Coventry Telegraph for an exhibition review and more photographs, and see this blog on Friday for an exhibition opening review.